Can a single mom of seven, more than 30 years removed from high school, overcome the myriad issues and obstacles facing her on the way to earning a college degree?

She can if she is Cherice Walker '20, who boldly stepped out of the only world she knew to embark on a journey that will help set the course of the rest of her life.

"From the word 'go' I have been ambitious about completing a college degree," says Walker, who is studying Business Management at FSC. "I realized my children were getting older and after a while wouldn't need me anymore.

"I thought, 'What am I going to do with myself?' I didn't feel I had anything of my own to claim. In other words, I haven't felt I accomplished anything in my life of significance other than having seven children. I felt I needed to establish something for myself immediately."

Walker is halfway toward her goal of independence and self-fulfillment. She earned an AAS in Business Administration from Suffolk County Community College, and is just a year away from completing her degree at FSC. Simultaneously, she is running a small business from home, selling hand-crafted greeting cards. She not only wants to expand that business, she has ambitions of creating a line of gift products she will sell online.

As both an adult and transfer student, Walker is living a college experience no traditional student ever will. She has dealt with serious family mental health issues, abuse and abandonment, eviction, family separation, working three jobs, lack of transportation, public assistance, and more. But she is a battler who refuses to give up.

For instance, when she was without a vehicle while attending SCCC, she trudged her way back and forth to school, a 30-minute walk. Later, the Department of Social Services separated her from a daughter and grandchild, she living in Medford and they in Sayville. It was more than a hardship, because both she and her daughter worked at Suffolk Community and by that time were attending FSC.

"I would be lucky to get at least five hours sleep throughout the day. Nevertheless, throughout all of my trials and tribulations my desire to obtain my bachelor's degree and maybe my master's never wavered. My heart's desire is to become financially independent of public assistance, and to accomplish the American Dream of owning my own home and running my own business, God willing. Meanwhile, I am teaching and showing my children that they can accomplish anything if they set their hearts and mind on it."

Accomplishment has become second nature to Walker. A student in Farmingdale's Educational Opportunity Program (EOP), she recently won the inaugural Norman R. McConney, Jr. Award for EOP Student Excellence. The award – given to only 42 students in the SUNY system - recognizes academic achievement.

Now Walker is attending classes Monday through Friday, beginning at 8 a.m. She has found Farmingdale to be a sort of oasis in her otherwise chaotic world. Her transfer from Suffolk Community was seamless, thanks to help by Judi Cestaro, FSC's Director of Transfer Services.

For someone who has lived most of her life under a dark cloud, Walker has found a new life brimming with hope. Farmingdale is helping her get out from under her burdens.

"With my faith and support system I've been able to achieve and overcome hurdles that were set before me. My greatest satisfaction in earning my degree will be that 'It's Mine!' It is something I did for me and not for my children or anyone else. I've managed to set a goal, regardless of how hard it was, and I won't quit." 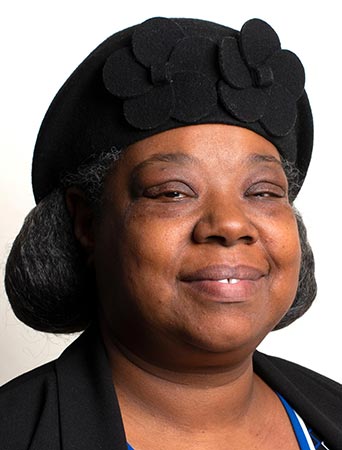