He wants to serve in Congress someday, and he's counting on Farmingdale State College to help him get there.

The whole story begins in Brooklyn, where Messiah lived with his mother and siblings, but without his absentee father. Because his mother had to work multiple jobs in order to support her family, she was unable to provide proper care for them, and they wound up in foster care. Messiah was five years old.

As he describes it, he went "switching from house to house" hoping for a fit with the right family. It didn't happen until he was 18 years old, and just weeks away from graduating high school. His savior turned out to be a man known as Apostle Ronald W. Gaymon, who gave Messiah both a stable, loving home and a spiritual education that eventually led to his becoming an associate pastor in 1999.

"I give credit to my dad [Dr. Gaymon]. He took a broken soul and showed me what it was to be loved and what it means to exist. Something I had not experienced since being involved in gangs and having the kind of family I had. He showed me how to believe in the potential that was God-given and that man could never strip away. It's a message I have wrapped my life around and teach others today. Was it easy? No, but as my grandmother used to tell me, the best people in God were all broken."

In fact, taking spiritual truths to heart, much less serving in the ministry, were the furthest things from Messiah's mind when he was adopted.

"I wanted nothing to do with the church. I thought it was all make believe; how could there be a God when I had to endure all that I did? It wasn't until I saw the impact it had on people's lives that I wanted to be a part of it. To show people how the struggles they face were not the end of their story, only the beginning."

Fast forward to age 24, when Messiah was torn between caring for his cancer-ridden grandmother and enlisting in the Air Force. His grandmother gave him advice that set his life on a new path.

"I had always wanted to enlist, but once I got into the church I felt I had a responsibility to cover the people who trusted me. Then my grandmother was diagnosed with Stage 4 cancer, and one day while taking care of her she spoke to me about responsibilities versus regrets. She told me to never let what I felt was my responsibility cause me to live a life of regret. Before she passed, she echoed those words in some of her last breaths. A year to her passing I graduated from Basic Training. So I knew I was in line with my destiny."

And he sure was. Working as a maintenance Flying Crew Chief and then Senior Airman, he racked up 10 medals and awards, including one for saving the lives of his crew from a potentially fatal fire. He would have seen combat, but for a severe injury he suffered while training for deployment.

Messiah left the service at the end of 2015, and then began looking for a college that would help him make up his mind about a career – at the time either law or medicine. He had already earned an online degree in psychology.

"I chose psychology because I have always wanted to know the thinking behind human behavior, to bring understanding to my life as well as assist others struggling in their life."

The determining factor in choosing Farmingdale was its reputation as a veteran-friendly campus. He wasn't accepted immediately because of low grades, but after taking a few courses as a non-matriculated student, he was able to enroll full time. Now he is a Science, Technology & Society major, and leaning toward law, which he believes will help propel him into a political career. He also runs the College's new American Legion Post and is vice president of the Student Government Association. Quite a lot going on for a 31-year-old father of two.

Messiah joined the SGA as senator, and the next semester, when the vice president's position opened up, he was unanimously elected to the office. One SGA member said that he has literally helped transform student government. First he developed a new logo, which began an effort to rebrand an organization he felt wasn't getting enough credit for its work. Next, he helped rewrite its constitution and by-laws. His motivation, he says, was to polish the SGA's image.

"What I've taught the SGA is that what we do today is not for us, but to better position the organization for the future."

And if Messiah's on-campus activities aren't enough, he's working on developing a mentoring company called The Academy of Man. Meanwhile, he is looking for his own mentor, to help him navigate the world of elective office. Most of his energy though is focused on graduating and moving on to what could be called Part 5 of his life.

"In the short term I want to be an example to my son, Messiah Jr., and my daughter, Madison. Long term I really want to be a congressman. How, I don't know yet but that's the light at the end of my road." 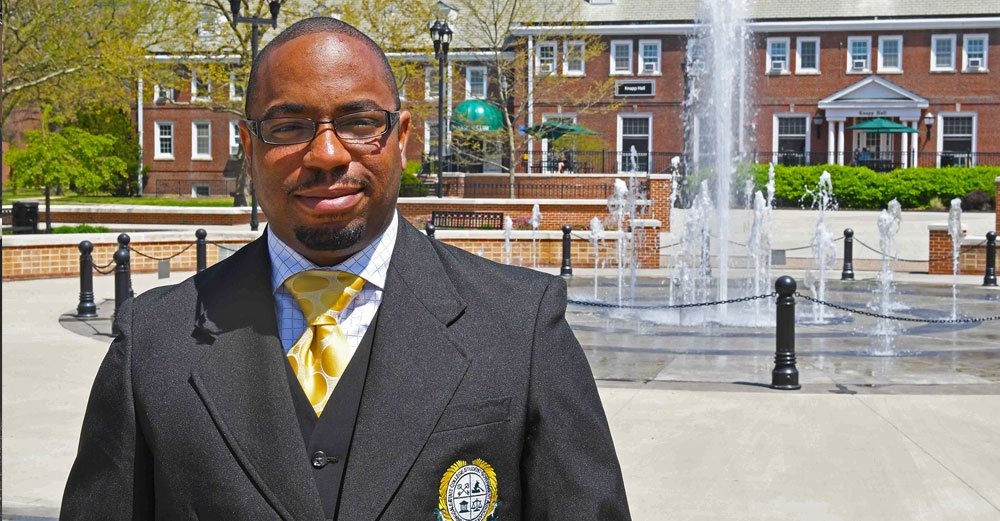