It takes a tough mom to raise a tough son. Not tough as in "tough guy," but tough as in determined, focused and hard working.

That, in a nutshell, is the story of Geo Cortorreal '17: business major; School of Business and EOP peer mentor; member of the Campus Recreation staff, FYRE squad and Residence Life Association; chair of the spring concert committee; treasurer of the SGA, and intern in the Office for Institutional Advancement. Is it any wonder his friends call him "Mr. Farmingdale"? (It doesn't hurt that he wears Farmingdale gear every single day.)

But even with a hard-nosed mom who set clear boundaries, there was no guarantee Geo would turn out to be an active, high-achieving student instead of a street punk.

"My mother was very strict, she had a curfew, and did not allow me to do things that most of my peers did," says Geo. "Yes, there was peer pressure to take the wrong path. My freshman year in high school I was associating myself with the wrong people. Thankfully my Spanish teacher saw the potential in me and told my mother, and with their help I was able to get back on the right path. Doing the wrong thing was cool in high school – the bad kids get the most attention and they're looked upon as the popular thing. Trying to separate myself from that norm was one challenge I fought in my early years of high school."

Another major influence on Geo was his brother Joshua (one of three brothers, including Jose and Ranfiel), a Stony Brook graduate who had a "life changing" effect on his little brother.

"If he turned out differently I would not have been in the position I am today, because by him actually accomplishing his dreams made me realize that it's possible. In the timeframe between high school and college he was very influential because he gave me valuable advice."

So, in a very real sense, Geo found himself more and more insulated from the wrong path, with mom and his brothers at home, and encouraging teachers at school. The latter helped Geo take a long, hard look at himself, through casual conversation and a few pats on the back. One teacher talked "The Office" TV show and the Dave Matthews Band with Geo; another told him "I'm proud of you." Sometimes that's all it takes to make a successful student out of an underachieving one.

Geo recalls one high school incident, where he failed a Regents test and had to go to summer school. Even though he wasn't living up to his potential at the time, Geo was devastated at having flunked. He worked with his science teacher for a redo, and then came the moment of truth.

"The day we went to get our grades he saw me and that's when he said 'I'm proud of you.' Looking back, my teachers were able to see the work ethic I had, and could enhance in the future. Something as devastating as failing a test, I was able to pick my head up and work harder instead of being down about it. I think they knew Farmingdale was a hidden gem and knew I could thrive there if given the chance."

FSC turned out to be Geo's second choice after Stony Brook, where he hoped to follow in Joshua's footsteps. It didn't work out, but because his teachers had touted it to him, Farmingdale was next on

the list. That didn't work out so well the first try either; his EOP application was rejected. But that's where the determination part of Geo's character came into play.

"My tactic was to bother them as much as possible to show I was interested in being in the program. When I received my letter from them, it said I was placed on the waiting list. Instead of just waiting around for a phone call or whatever, I believe I made my own luck with them. I called about every day, and asked if there was anything else that they needed from me. I don't remember what exactly was said or done, but I know I got a packet in the mail a week later saying I was accepted into Farmingdale. I was truly happy because I felt I personally was a factor in being accepted into EOP. I knew I didn't meet some of the requirements but I had shown them the type of person I was and it changed their minds."

But even at that, Geo still had to work through some very important things, beginning with his attitude.

"I considered dropping out a couple times, but I was never serious enough because I thought about the repercussions I would get from my mom. So one can say the thought went away once I thought about her. I didn't want to have any regrets later in my life.

"I think I struggled with adjusting to college life more than the actual schoolwork. The college environment was much more fast-paced for me. The fact that an essay is due on Monday and then you have a test the next day for another class - I felt it was hard to juggle different expectations from different classes all at once. In college, everyone has their own agenda; there is nothing wrong with that but it was something I wasn't used to. I clearly wasn't ready yet; I attended my first class without any notebooks, pens or pencils."

Given all that, it's surprising that what finally got Geo moving was an A- in one class.

"I was so upset about that because I thought I deserved an A. I was nearly perfect in the class except for some absences. I spoke with my professor and he said it was those absences that set me back. ABSENCES! So what changed, I never missed a class again unless I had to for an extreme reason. Pretty much, I threw away the laziness I had. I ended up on the President's List Spring '16, and then on the Dean's List Fall '16.

"My personality didn't change, but what did was my mindset. I finally figured out my on/off switch, when to be serious. My boss when I was a peer advisor for EOP taught me how to switch gears in a work environment. He knew I'm the type of person with a lot of energy, and he told me I have to be able to channel that energy in different ways. What changed about me is, I started to choose my priorities correctly, whether it was going to play basketball with my friends or finishing a paper a couple days early to give myself some leeway."

Once Geo got his attitude and priorities sorted out, and began nailing his school work, he turned his attention toward campus activities. A self-described "kid who couldn't sit still," he proved that with the number of commitments he made to getting involved.

"I wanted to have a connection with Farmingdale. It may sound cheesy in a sense but that's what inspired me. I wanted to know the area, the campus, and history better. I also feel like being involved in campus activities builds a better community in Farmingdale. I had the mindset that I owed Farmingdale at least that, returning the favor for letting me go there."

So being called "Mr. Farmingdale" is not as far-fetched as it seems. His friends back home use the name because Geo's always outfitted in Farmingdale gear. On campus, the name has more to do with what he does here.

"I knew it was serious when my boss from Campus Recreation called me that when we were going over my schedule for work hours. I was telling him everything I was doing at the time and then he said that. Then and there I knew the name was real."

As real as it gets, especially when you consider Geo's schedule for this, his final semester. Seven classes, an internship, SGA treasurer, Campus Recreation, Residence Hall Association, the FYRE squad and School of Business mentor. And he wanted to do a weekly show for Ram National radio, but the station is offline. No wonder he wants to squeeze in weekly visits to the Health & Wellness center for a massage.

"It's going to be a hectic semester for me but at least I'll be productive. I do have my doubts about being able to get it done, but I keep reminding myself that I worked so hard to get to this point of my life and that I'm just getting started. I believe that I was meant to have this difficult path to prepare me for what's next in my life. Although I am nervous and sad about leaving Farmingdale, I am excited about my future."

And so it goes for the almost-bad boy. Things have turned out well for him, thanks to mother, brothers, friends and teachers – especially those who encouraged him to enroll at FSC.

"Farmingdale has been the best decision I ever made. All the relationships with friends and faculty/staff that I made, I can never take it for granted. Whenever I go back to my high school, I tell the students there to look into Farmingdale, just like my teachers did with me. It has become a second home to me and I love it here." 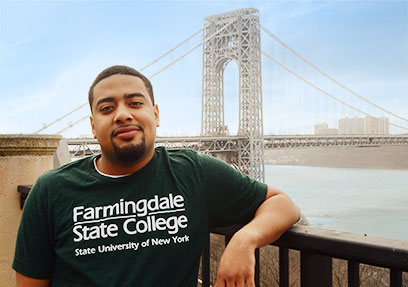