Greysi Regalado and Alexa Toyas: A Love of History Shapes Their Future

They're headed for the same place, and it's not surprising given they have so much in common.

Toyas, Valedictorian of her class with a BS in Professional Communications, will attend Newcastle University to study International Relations. Regalado was a Science, Technology & Society major, and will be working toward an MA in Geography Education at University College London.

Besides their studies in England, the ladies have something else in common: a love of history. Regalado minored in the subject and Toyas took a concentration, with an eye toward making it an important element of their academic and career paths.

For Regalado it was a toss-up between history and political science.

"I decided that politics was going to be my main concentration, because that was my dream major. But I took a similar amount of classes in both disciplines. Ever since I was in high school I could not decide which I liked the most, politics or history. Fortunately, all social sciences are intertwined, so I never bothered to decide."

Toyas chose Professional Communications as her major because she wanted to strengthen her oral and writing skills, thinking law school was in her future. But history was always a passion of hers, and she is convinced that it will serve her well at Newcastle.

"An understanding of the historical events leading up to our current foreign policy agenda will be key in furthering my studies."

How we got from here to there
Probably no one in Toyas' family is surprised she will be studying International Relations. Ever since she was a child she has had a broad view of the world, both from hearing travel stories from her grandfather, a flight engineer for now-defunct Pan American World Airways, and through events with an international flavor at the schools she attended growing up in Massapequa, Long Island.

"Throughout my life my grandfather told me anecdotes of the unusual places he traveled. Our time together when I was little consisted of us drawing and coloring at my kitchen table, while he told me stories about his travels. I saw him as a citizen of the world because his heart had truly been in so many places. My traveling is almost a dedication to those memories."

Growing up in the Massapequa school system, Toyas was exposed to the big, wide world another way: with food. In middle school, students were required to bring in dishes that represented their cultural heritage, and in high school the language department hosted an annual international food festival. Toyas brought dishes from Greece, her ancestral homeland.

To say that Greece has held a fascination for Toyas would be an understatement to the nth degree. And when she did a study-abroad semester there, she had the time of her life.

"The word 'dream' for finding out I would travel to the place of my heritage almost seems like too light a word. I remember standing on a rock in Cape Sounion at Poseidon's Temple, watching the sun set over the Aegean Sea. It was a picture-perfect, surreal experience. I knew that my papou (grandpa) and great grandma were smiling down on me knowing that I had finally made it back to where we come from."

More than one of her professors has described Toyas as "motivated." That inner drive led her to the top of her class, and is now burning brighter than ever. It has helped her achieve her goals so far, and will now no doubt take her to a lofty next level.

"Success to me is a loving family, a career with the UN, volunteer work that impacts a large group, and world travel to not-so-touristy places. My personal mantra is that I will not stop until I achieve all of these things, even if that takes my lifetime."

Regalado came to Farmingdale from the Dominican Republic, through a scholarship program sponsored by the Dominican Ministry of Higher Education, Science and Technology. Studying here, she says, "was one of the greatest opportunities I have had in my life."

Farmingdale was the right decision for Regalado in many ways, not the least of which was an internship that sent the political science major to Washington, D.C. to work at the Iraqi embassy, where she worked in the Media and Communications Department. Her responsibilities included daily briefings, attending events and – as most interns have to do – shuffling paper.

"I enjoyed D.C. in a professional way. Every day there was a new event at a different think tank, or something to do near Foggy Bottom or DuPont Circle. Furthermore, D.C. was a glance at the world that I intend to join, between diplomats and scholars of public policy."

"At first I was having fun, and first semester my GPA was 'OK'. After a few semesters, I realized I could actually graduate with honors and did an extra effort in getting those A's."

Also like Toyas, Regalado had a vision of the world that extended beyond her home in Santo Domingo.

"Since I was a child, I was aware this world was big. My family is very cosmopolitan. I took my first French class at the age of 10. My aunt Cynthia taught me Italian, and sent me to an English institute at 13 years old."

Now, with her plans to study Geography Education, her eyes will open even wider.

"Politics and history are my passion, but geography offers the best of two worlds: it is a social science that is more connected to technology. Therefore, with a MA in Geography I could remain in academia, pursue a government job or work in the private sector." 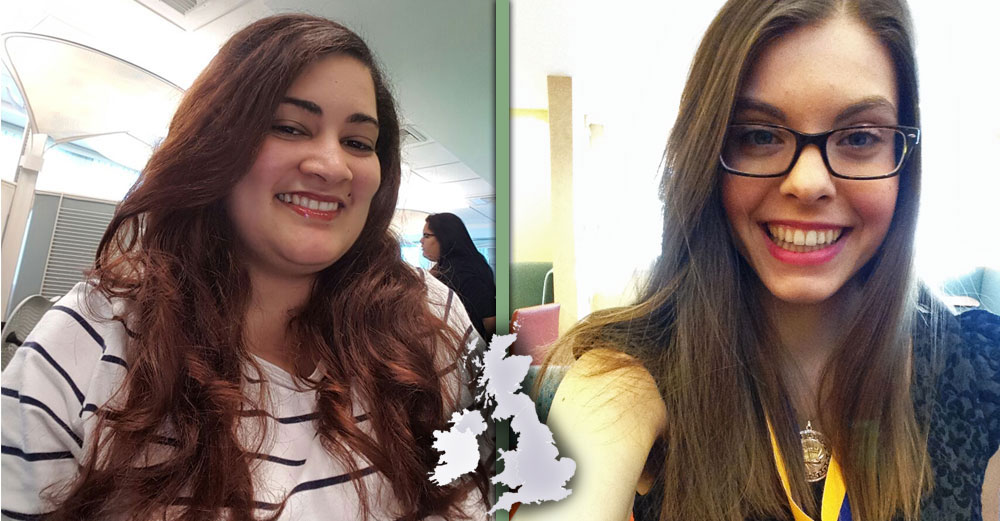