There is no Italian flag in the Campus Center at Farmingdale State College. It's a school tradition to fly flags of the home countries of students who come to Farmingdale to earn their degrees. Flags from countries such as China, South Africa, Peru, the Dominican Republic, India and South Korea fly high, but Italy is not to be found.

That will change in May.

That's when Samuele Riva, a native of Cadrezzate, Italy (population 1,800), receives his BS in sport management.

And to make the story even better, Samuele has accomplished what he thought impossible during a tortuous first month here: he's graduating in three years – as valedictorian of the Spring 2016 class.

"I am honored to be the Farmingdale State College valedictorian for 2016," Samuele says. "This prestigious achievement compensates for my hard work and dedication, motivating me to achieve even greater goals in the future."

When he arrived in the United States, Samuele thought he could get by on limited English skills, but he was rudely awakened his very first day on campus, when he walked into an accounting class and discovered he couldn't understand what was going on.

"I was paralyzed and did not know what to do or say," Samuele recalls. "I didn't even know what a syllabus was and had to Google it. I could not take notes or understand the directions of the professor. I walked out of the first class very confused and upset because I did not expect these difficulties."

Samuele didn't drop the class, but by the end of his first month at Farmingdale he was seriously considering going back to Cadrezzate, where he had been valedictorian of his high school class and was looking at a bright future at a university in Milan, 50 miles south of his hometown. That's when his parents stepped in.

"They were very worried when I left Italy, and they were even more concerned about me after hearing my issues in my new American life," Samuele says. "I Skyped them almost every day and they understood exactly what I was going through. However, they always encouraged and motivated me. They believed in me and my potential. I told them I wanted to come home but they were the ones who gave me the strength to continue to pursue my dreams."

Fortified with new-found determination, Samuele worked hard to overcome his sense of inferiority.

"To combat these feelings I spent afternoons at the tutoring center and nights studying until 4 a.m. in order to improve my English. I documented unfamiliar words and obsessively memorized their meanings. I devoted all my time and energy into my schoolwork and language acquisition."

Amazingly, Samuele finished the semester with a perfect GPA, with a 21-credit workload. He explains it this way:

"After getting more familiar with the American school system, I realized that I could graduate 'easily' in three years if I took more credits each semester. Therefore, I took five classes and two language exams that gave me the opportunity to obtain 21 credits. It was a big credit load for my first semester but I was not involved in many other extracurricular activities; I had plenty of time to focus on my academics.

"School is my first priority and I devote as much time and effort as I can to succeed in it. I had the same mentality in high school and that is the reason why I achieved my valedictorian status. Academics come easy with this mindset; I have always focused more on learning and expanding my knowledge rather than procrastinating or complaining about the heavy schoolwork."

Jump forward three years and out-of-the-classroom activities are central to Samuele's academic career. He is president of Sigma Beta Delta and the Golden Key International Honor Society, where he oversees a number of community-centered events. He tutors classmates in Italian, and plays on the golf and soccer teams. Both sports have been, and will continue to be, central to his life. Golf has provided an internship that would be the envy of any sports-minded individual, and being an agent for European and American soccer players is his chosen career path.

Last year he talked his way into a U.S. Open golf tournament internship, though he didn't have to do much arm twisting, says Jeff Poplarski, adjunct professor of sport management at Farmingdale. Poplarski, a nationally regarded sports chiropractor and director of the health and wellness team for the Open, said that when Samuele asked about the internship he knew he'd scored the proverbial hole in one.

"Samuele was the best intern I'd taken to the Open in five years."

What impressed Poplarski the most was Samuele's work ethic; a typical day at the Open called for a 5 a.m. – 10 p.m. schedule, which didn't faze Samuele at all.

"Most kids will crumble under that environment, getting up at 4 a.m., but he really shined." And because of that, Samuele will work the 2016 tournament as well.

With the 2016 spring semester now in full bloom, and graduation just a couple of months away, Samuele is working on the next steps in his life: law school and a career as a sport agent, importing talented European players to Major League Soccer, and exporting promising college stars to play in European soccer clubs.

Circle back to Samuele's decision to study in the U.S. As he explains it, the American sports industry is dynamic, vibrant, and thriving; in Europe it is moribund. So that meant finding a school that offered a degree that would put him on the path to his dream. That's where Farmingdale entered the picture.

"I knew I wanted to study sport management, and I wanted to live in New York," Samuele says. "I was also playing golf and soccer, and I saw on the NCAA website that the Farmingdale men's golf team was in the finals every year. It was a decision based on dreams, academics, athletics and finances."

"I am very proud to be the first Italian student to graduate at Farmingdale. After all my initial difficulties, I did not foresee myself walking on graduation day in front of my family, my friends, and my girlfriend Jackie – yes, I also fell in love here too, ha ha! But after all the hard work and challenges that I overcame throughout these three years, it will be even more special and fulfilling." 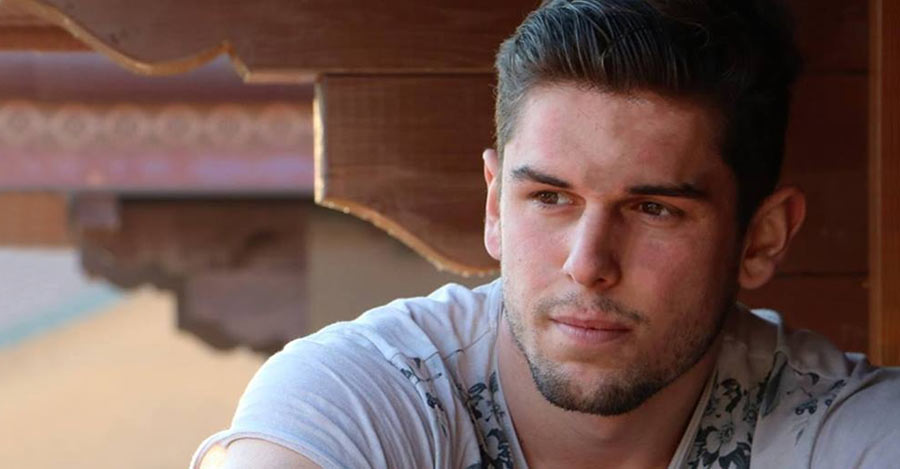