Erica Alter: In the Spotlight

When Erica Alter enrolled at Farmingdale in 2012 she was sure of two things: she was going to become a dental hygienist, and had little interest in joining a sorority. Fast forward to 2016: Erica is a Law Enforcement Technology and Criminal Justice major, and vice president of the Greek Council.

Originally Erica had aspirations of studying at an upstate SUNY school. She changed her mind when her parents began lobbying her to stay on Long Island. Farmingdale came into the picture when her parents encouraged her to pursue a dental hygiene degree. After all, it made sense, since Erica had interned at a pediatric dentist's office while a high school senior. So, Farmingdale seemed like a good fit to all concerned.

As it turned out though, Erica never applied to the hygienist's program. Instead, she shifted gears and began work on an associate's degree from the School of Arts & Sciences. Then somewhere along the way she had an epiphany.

"As I was taking these classes I came to the conclusion that it would make so much more sense to consider a career path in the legal field. My parents are both attorneys and have their own firm, so I was guaranteed a job after law school."

Erica graduates in spring 2016, and already has Brooklyn Law School in her sights (though she is considering other schools as well). Currently she works at the campus bookstore, but also finds time to commute from campus to Garden City, where, at her parents' firm, she is working on criminal, personal injury, and matrimonial cases.

So, two jobs and two majors – the kinds of commitments that would take up most anyone's time and energy. But not Erica's.

She is driven. So much so that she is not only Greek Council vice president (she has also served as president), but the new president of the Student Government

Association. But, she says, jobs and campus activities are secondary to her studies.

"I make sure to let everyone working with me know that school is my first priority," says Erica, a regular on the Dean's List. "Yes, I hold different positions, but at the end of the day my homework and studying will get done before anything else. "

But Erica in no way feels conflicted, juggling school work, campus and community activities, and jobs. In fact, her high-pressure schedule works in her favor.

"I feel that the more responsibilities I have, and the busier I am, the easier it becomes to get everything done. When I'm forced to budget my time and prioritize, I find myself completing tasks more quickly because I know that if I procrastinate I won't get everything done."

Part of the reason Erica can get everything done is that she is a resident student; no time wasted commuting to and from home. She had two compelling reasons for wanting to live on campus.

"From the start I wanted to make sure I had the full college experience, so I wanted to make Farmingdale my home. I also have seven younger siblings, so I felt that living on campus would give me a better atmosphere to study and get things done."

And it was Erica's decision to live at FSC that helped turn her indifference to sororities upside down. She had already been softened up by her high school friends, who talked incessantly about becoming a sorority sister. Then, when she moved into her dorm, she found that her roommate was gung ho for Greek life too. That caused a major shift in her thinking.

So much so that soon she was working with other students to organize a Farmingdale chapter of Sigma Delta Tau. Chartered in early 2013, it became the first Greek organization on campus. Soon other Greek sororities and fraternities followed, and the Greek Council became necessary.

Erica became the Council's first public relations chair, and then moved up to vice president. In 2015 she was named Sorority Woman of the Year by the Office of Student Activities. Not bad for someone who at one time couldn't envision a sorority enriching her life.

"I really didn't know what being in a sorority was about, and I definitely had no idea how rewarding an experience it would be. Now through my sorority I find a sense of leadership, friendship, community service, scholarship, health and wellness, and more. Through the Greek Council I find a sense of community with other Greek organizations."

It was that sense of community that brought Erica, other Greek members, and alumni together to create the Greek Time Capsule, a repository for letters, photos, flash drives, membership cards and pins, and more – all to be read and viewed 15 years from now. It is buried near the Memorial Oak outside Whitman Hall.

"We thought a time capsule would be interesting for future generations. We received over 200 letters between active members and alumni," Erica says with a sense of pride. "Alumni were sending us letters and donations from all over, from California to Vietnam."

Earlier this year Erica attended Leadership School, sponsored by the national office of Sigma Delta Tau in Washington, D.C. Her favorite session was on how to run a successful meeting. But what she learned must have been only icing on the cake, for a young woman who has exhibited exemplary leadership at FSC for the last three years. 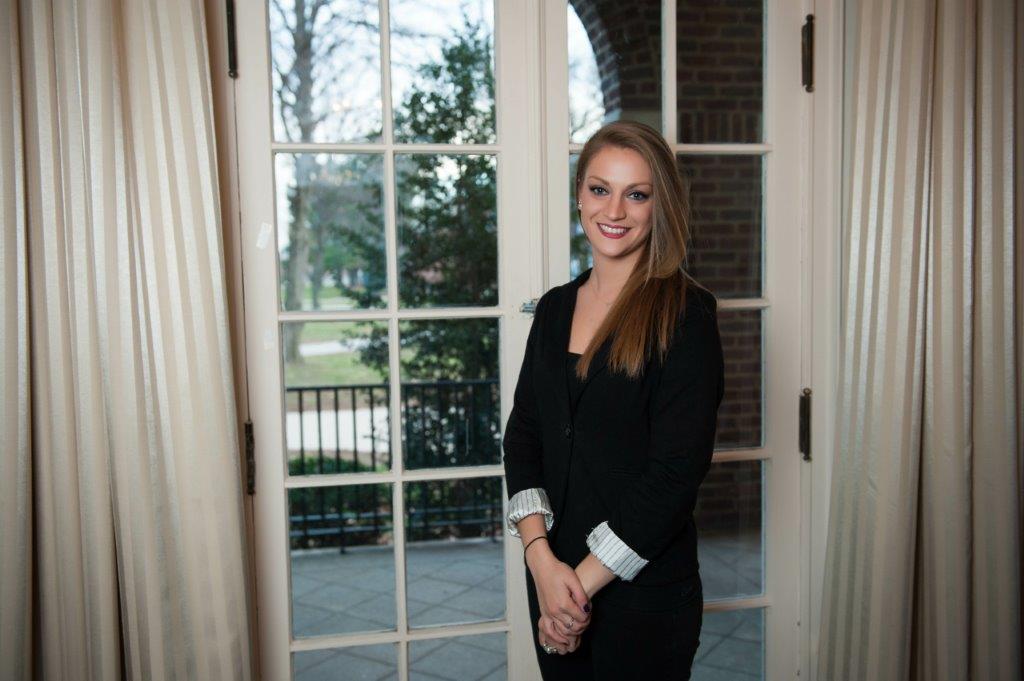