Nicholas King: SUNY Alum Takes Us Out to the Ballgame

He did everything with the Staten Island Yankees but crack the lineup. But that's about the only thing Nicholas King didn't do with this New York Yankees minor-league team.

Nicholas King '15, a Farmingdale State College Sport Management grad, did a 700-hour unpaid internship with the "Baby Bombers" last year (only 195 hours were required), where he learned pretty much all there is to know about running a baseball team. He ascended the heights, working with the team's CEO and President/General Manager, and did the nitty gritty too, helping pick up trash after the game, painting foul lines, and dragging the tarp onto the field when it rained. In between he worked on team rosters, ticketing, marketing, accounting, playoff schedules, public relations, special projects, field operations, and more. He even escorted a few celebrities onto the field at promotional events.

"I felt like every time I walked into the office I was working my dream job," Nicholas says. "The internship was a life- and career-changing experience for me. I came out of my shell and developed skills I never thought I had – communications skills, interpersonal skills, and organizational skills, to name a few."

Now Nick has literally graduated to the majors, as an inside sales rep in the ticket sales department of the New York Mets. His primary responsibility is to find potential season-ticket customers.

The Mets called him in May, while they were reviewing applications from candidates from across the country.

"This opportunity with the Mets has been an eye opener," says Nick. "It's a great way to start in the industry. It's like a master's program for sports sales."

But that's not all Nicholas has done since graduating FSC. He also worked at Belmont Park as a sales associate – just in time for the Belmont Stakes, the third leg of horse racing's Triple Crown.

"A big perk was watching the race from the VIP box. I was able to see and record American Pharoah win the Triple Crown; I also grabbed some dirt from the track as a souvenir."

It was Farmingdale that paved the way for Nicholas to find his dream job with the Mets. He enrolled at FSC because of its affordability and the quality of the sport management program, and on the recommendations of FSC alumni. He graduated with a BS in Sport Management, a minor in Business Management and a New York State coaching certificate. He credits his mom, who worked for a company that gave her New York Yankees box seats, with nurturing his love for sports.

"From the smell of the grass, to Derek Jeter's grin, the taste of a hot dog, and the feel of the crowd shaking the ballpark, I fell in love with sports – mostly baseball. I knew from then on I wanted to have a career in sports."

His career literally started at Farmingdale, where he worked as an Athletic Assistant. One of the highlights of the job was setting up for the NCAA Division III baseball regional championship tournament. So it wasn't such a leap that he would succeed with the Staten Island Yankees, and now the Mets.

Nicholas is also somewhat of a philosopher, quoting John F. Kennedy about purpose and direction, and Winston Churchill about living a meaningful life. He also likes volunteer work, pitching in for the Make a Wish Foundation, St. Jude's Children's Hospital, and a number of sports teams. "For me that's what it's all about – giving back to those who need it."

He gave in the classroom too, according to Professor Sarbjit Singh, a member of the Sport Management faculty, who lauds Nicholas's ever-present energy and enthusiasm. "He is very committed. He is a real ambassador for us. The thing that stands out about Nick is his embrace of the importance of networking, to get out there and meet people who may have an impact on his career."

Nicholas agrees. "Getting a degree is a good start, but now it's all about who you know. Networking is a huge key to achieving your career goals."

Tom Azzara, FSC's Associate Athletic Director, will bet a bundle that Nicholas has all it takes to make a successful career.

"He is a great worker with an amazing work ethic. He is one of the best workers we've ever had in the Athletic department."

Surprisingly, Nicholas believes he has what it takes for a big-time career, because he has not been afraid to fail.

"My advice to students would be taking every chance you get. Keep pushing forward. Don't be afraid to fail. Failure doesn't define you; it's how you respond to failure. Life is about risk-taking. Fail as much as you have to in order to succeed."

Given Nicholas's academic and career paths, it sounds like awfully good advice. 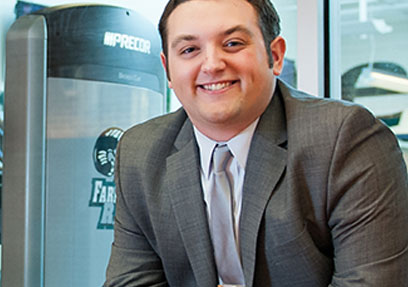