Andrew Hesse: In the Spotlight

Has a book ever changed your life? Really changed it, as in completely altering its direction? Andrew Hesse '11 has lived it firsthand.

"It was as simple as a single book," Andrew says. "I was a 17-year-old high school senior with no direction and mediocre grades when I read James D. Watson's book, DNA: The Secret of Life. Molecular biology has been my passion ever since."

The recollection of that experience gets Andrew revved up.

"I was captivated. Like a young child learning about the space race, I could feel the palpable tension between the Human Genome Project and Craig Venter's Celera Genomics, gunning to be the first to sequence the human genome. As with the space race it didn't matter who lost, because society would win regardless."

Andrew decided to pursue his passion in 2006, when he enrolled at Farmingdale. He says: "I wanted to go to a local, affordable school that offered a degree in biology. The bioscience degree at FSC was a great match."

Andrew went straight to work, excelling both in the classroom and in campus activities. When he wasn't studying, he was teaching, working part-time as a tutor of biology and chemistry. And when he wasn't teaching he was volunteering as a student rep for Open House. He also founded the Biology Club. Then there was his restaurant job. But none of these things slowed him down academically, because in 2011 he won SUNY's highest student award, the Chancellor's Award for Student Excellence.

"It was mostly from an 'internal drive.' Managing school, extracurricular activities, work and everything else going on in one's life is never a trivial matter. I'm not poetic enough to articulate how motivation manifests itself, but I can say much of it comes from the cliché, 'never accept failure as an option.'

"I look at most things in life as work, a responsibility. It's just something you have to get done, and sometimes you have to be a little creative to make that happen."

Before he was through at FSC, Andrew – a first-generation student - added to his course load a minor in applied mathematics. Says Richard Pollard, an adjunct professor in the math department: "What made him stand out was the attitude he displayed. I sensed he was genuinely appreciative of his opportunity to get an education. As an educator, I have the privilege of serving many people who pass through my classes. I am always grateful when one writes me after the semester has ended to say 'Thank you.'"

After Andrew graduated in 2011, he didn't stop working for a minute. He leaped into the challenging world of job hunting, spending up to six hours a day at his local library, researching companies, writing cover letters, and applying for jobs. He finally hit pay dirt, being hired by Schick as a contract research

assistant. He moved to the company's Milford, CT, research facility, where he worked in the sensory research lab doing statistical analysis. His applied mathematics minor was paying off.

But he stayed only eight months, graduating to a scientific analyst's position at Transgenomic, a global biotechnology company based in New Haven. Another eight months went by, and he was promoted to genetic and bioinformatics analyst, a position he held for nearly three years. In the meantime, he was further boosting his education by enrolling in the master's program in applied genomics at the University of Connecticut. He will have earned a Master's in Professional Science when he graduates next year, having been trained to make a go of it in industry, rather than going into academia. In May of this year he was promoted again at Transgenomic to senior analyst, in the molecular diagnostic division, where he works in the analysis department of the genetic testing laboratory.

But there is a dream job in his future.

"It's being in a position to make meaningful, long-lasting contributions in the field. Academic research is where most 'rock star' science happens, but my goal is to find my dream job in industry, where well-trained masters of science professionals function as scientists. " 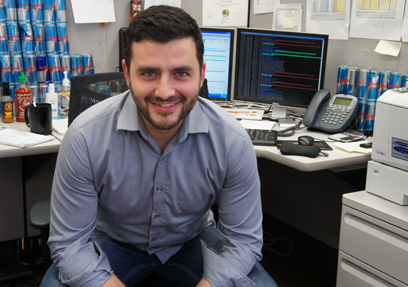