Raising children can be a real challenge. Working in a hospital can be stressful. And taking a full course- load at college while you're balancing both of the above can be both challenging and stressful.

But this is not a theoretical scenario. A student at FSC actually lives this life. Meet Alexander Salcedo '15.

Alex – not your typical student at age 33 – is helping raise a young son and daughter. When he's not with his kids and not in class, he is a senior nurse attendant in the emergency room at North Shore LIJ's Southside Hospital in Bay Shore. When he is on campus, he's a ali, Colombia, major – with an impressive GPA. He will graduate December 2015, and then enroll fall '16 in a physician's assistant program at a local college. After that, he will enroll in an MBA program, and parallel to that become a certified diabetes educator.

"Despite working long hours, Alex has been able to excel academically while taking a full credit load," says Dr. William Germano, a member of the biology department faculty, and one of Alex's favorite instructors. "He is the perfect example of the old saying that 'hard work pays off.'"

To understand how dynamic his academic and career lives are, last spring Alex showed up in his hospital scrubs at an evening Political Philosophy class taught by Dr. Beverly Kahn. She is convinced that Alex can succeed at anything he puts his mind to.

"He's a serious and hardworking student," Dr. Kahn says. "In my class last spring, Alex developed and demonstrated the type of analytical and critical thinking skills that are essential to succeeding as a physician's assistant."

There will be no such thing as coasting to the finish line for Alex. This fall, as part of his degree requirements, he will intern – somewhere between 150 – 200 hours, at no pay – in the intensive care unit at Southside Hospital, where he will do patient/family consultations, daily rounds, and critical-care planning.

"This internship will provide additional knowledge and skills in a critical-care setting that will make me a stronger candidate for the physician's assistant program."

Dr. Gerard Defeo, adjunct professor of biology and one who greatly influenced Alex, is rooting for one of his star students.

"He has clearly articulated his career path and occupational goal," Dr. Defeo says. "As a result, Alex will be an asset to the healthcare community."

Alex worked in physical therapy and chiropractic offices, and completed an AA in liberal arts at Suffolk Community College, before discovering his passion for medicine. That's when he enrolled at FSC, in the fall of 2012.

"I had no idea what I was passionate about, or what career to pursue until I turned 30. Then I had an epiphany and went for it."

He enrolled in the STS program because of the flexibility it offered.

"STS allowed me to create 'clusters' for the required science, psychology, and sociology classes that I would need to apply for a physician's assistant program."

Alex was born in Cali, Colombia, and emigrated to the U.S. when he was four years old. He grew up in Flatbush, Brooklyn, and moved to L.I. when he was in ninth grade. He plans on staying in his adopted country, though he wants to be a world traveler, doing just what you'd expect from a guy like him: he plans to travel internationally, providing free medical care to those in underprivileged countries. 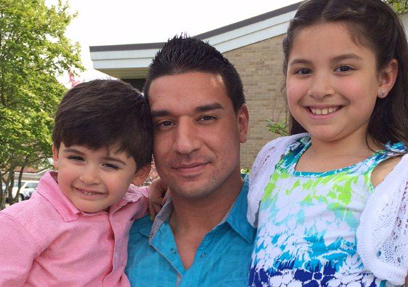