Many students dream about it, plan for it, fight for it, study for hours on end, pick their professors' brains, join campus clubs, and on and on. The thing about 2015's Valedictorian Abraham Im, is that the idea never crossed his mind when he enrolled at FSC – or during his first two years here.

"I never saw myself excelling, when my goals were about surviving college," Abraham says. "I had no intention of maintaining a 4.0 GPA.

"I was floored when I received a letter from President Keen saying I was nominated for Valedictorian." He was not only nominated, but the selection committee voted unanimously for him.

Abraham, who graduated with a BS in Aeronautical Science-Professional Pilot, admits to having goals that were not that lofty. They were, he says "not missing one class, report early to every class, and do the best I can in every assignment." In retrospect, that was an inspired pathway to the college's highest honor.

"You could say I didn't need an airplane to feel like I was soaring through the skies."

"I wanted to become a professional pilot ever since I was four years old," he says. I discovered this passion from my first flight, from New York to Seoul, South Korea. After that I always looked up to the sky when an airplane flew over. I always told myself that I would become a captain one day."

There were times though when Abraham must have thought he'd never get airborne. His father died when Abraham was just 14 years old, and he had to quit school to help with the family's dry cleaning business, in Flushing, Queens. He later enrolled at North Queens Community High School, and then started thinking about college. He chose FSC because it was the only SUNY school to offer an Aeronautical Science-Professional Pilot degree.

"There are several ways of earning a pilot's certificate, but I wanted a quality college education while earning the necessary certificates and ratings to become a professional pilot. "

Abraham not only got a quality education, but he offered quality as well. He won an amazing six scholarships while at FSC, including one from the Dominic A. Murray Memorial Foundation, which was established in memory of 17-year-old Dominic Murray, who died in October 2009 from sudden cardiac arrest (SCA), after collapsing on the FSC basketball court during a pick-up game. From there, Abraham was inspired to become a certified CPR instructor, moved by the dedication of Dominic's mother, Melinda Murray, to saving lives. Saving lives, in fact, was the motivation for Abraham becoming a New York City Parks Department lifeguard, too.

It was that kind of dedication that helped Abraham endure his brutal daily commute. First it was a train ride from Flushing to Farmingdale, then a long walk to the Aviation Center, and from there to the campus. At the end of the day, it was back to the train station. It was a seven-mile trip, and Abraham did it six days a week.

"It was definitely one of the major hurdles in my life, but I told myself to take it one day at a time. Eventually one day became a week, a week became a month, a month became a semester, and one semester led to another."

During his commute, Abraham really used the time to his profit.

"I took advantage of those walks by using the time to conceptualize newly learned concepts, brainstorm ideas for my projects, and plan for the next day. I also learned a lot about myself, which was a major plus."

Dr. Jeanne Radigan, chair of the Department of Aviation, has high praise for Abraham.

"His enthusiasm, dedication, and ambition are perhaps his biggest strengths. His outstanding work ethic and personal integrity are second to none."

Renee Adams, Educational Counselor for the Academic Student Achievement Program (ASAP)*, is sold on Abraham too.

"Abraham is capable of anything he puts his mind to. He is an incredible young man with still more milestones to conquer."

Naturally, the student whose main goal was to finish school is pleasantly surprised by what the Farmingdale faculty and staff has to say about him.

"I am flabbergasted. I was surprised that I was noticed because I was always one of the quietest in the classroom."

*ASAP is a federally funded program that provides services for first-generation college students, students from low-income families, and students with disabilities. 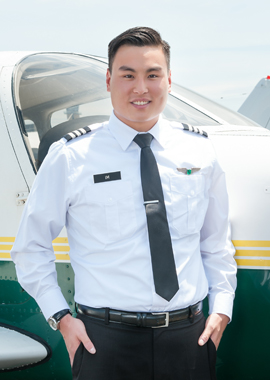