Steven Suskauer : In the Spotlight

When Steven Suskauer began working at age 14 at Dunkin' Donuts, it started him on a path that not only earned him spending money, and later money for college, but actually changed his life.

That's because for some people, work is only a means to an end – a paycheck. For Steven it was an entrée into a world he couldn't have imagined when he took his first job, a world that slowly opened up for him as he worked his way from Dunkin' Donuts to Applebee's to Carrabba's Italian Grill, and most recently at Wells Fargo Bank.

Yes, money was important. Over the years he earned enough to put himself through school – first at Nassau Community College, and from 2012 to this past spring, at Farmingdale State College. He did everything in the restaurant business, from serving to working in the kitchen and behind the bar. Finally he earned his way into management, at Carrabba's, where he began to grow in ways he had never imagined.

There he managed as many as 80 employees, and worked not only on Long Island, but on assignment to Carrabba's restaurants in New England. During this time – working a demanding schedule that sometimes saw him working up to 75 hours a week – he looked inside himself, and saw a new Steven Suskauer emerging.

"This experience got me outside of my myopic mindset as a teenager," Steven says. "Being on my own taught me fundamental lessons that have shaped who I am today. I realized my strengths and weaknesses. The added burden of independence actually became a blessing in disguise, where I learned how to manage my studies alongside work."

Today, for the first time since his high school years, Steven is not working. He can't; he is devoting all of his energy to earning a Master's in Economics at Bocconi University in Milan, Italy. Besides, he has the luxury of not having to work; he is there on a full two-year scholarship. He earned the "free ride" by performing at an extremely high level as an Applied Economics major at FSC. He graduated Summa Cum Laude in spring 2014 with a 3.96 GPA, and scored high marks on the GRE exam. Combined with an active academic life, and several academic awards, he was accepted for the fall 2014 term at Bocconi – considered the "Harvard" of Italy for its economics, finance and business curricula.

"Steven demonstrates an incredible level of maturity, as evidenced by his ability to leave home after high school and pursue employment opportunities to support himself and attend college on a full-time basis," says Dr. Beverly Kahn, chair of FSC's Fulbright evaluation committee. "His enthusiasm, energy, intelligence, and tenacity to accomplish any and all goals he sets for himself are clearly evident in all he does."

Economics professor Dr. Wisdom Akpalu, another of Steven's boosters, says he was a dream student in the five classes in which he taught him.

"Steven is naturally gifted, and takes his education seriously. He belongs in the top two percent of the students I have taught at Farmingdale."

Now, Steven is engaged in the most challenging part of his life. "The first semester is perceived as the hardest among alumni," he says. "The great thing about this program is that you are really challenged not only as an economist, but as a mathematician, statistician and social scientist."

Challenging yes, but not so demanding that Steven can't pursue other interests, such as traveling in his host country and serving in student government. And he's already thinking about next summer - when he has to do a 10-week internship, probably at an investment bank or management consulting firm – and beyond. His long-term plan includes working for two years as an analyst somewhere in Europe, before returning to the States to begin an MBA.

In the meantime, he is enjoying experiencing his life's evolution.

"I feel like I am starting life over in many ways – which is both refreshing and humbling. I think the best thing I can pass along to someone is to consider the options available outside your comfort zone. It has truly changed the way I think, behave, and interact with the world." 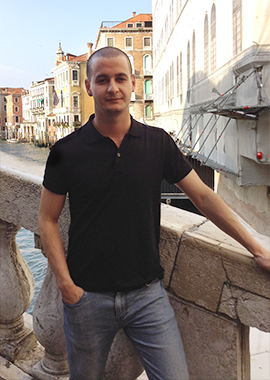