Camille Romero: In the Spotlight

"I hate to lose. I believe that whatever I'm doing, I want to be my best at it. If you're not going to put 100 percent into doing something, then why do it?"

That's the philosophy behind the success of Camille Romero, captain of FSC's women's basketball team and an "A"student in sport management. She has been on the President's and Dean's lists, was the 2013-14 Student Athlete of the Year, and during last season averaged nearly 20 points in the team's 25 games. She also earned top honors – Player of the Year – from the Skyline Conference. Camille, as the old saying goes, puts her money where her mouth is.

Funny thing is, Camille almost didn't play for the Rams. Though she's been playing basketball since she was a child, she was on the verge of packing it in when she enrolled at FSC last year. Luckily for the team, Dr. Mary Villani, chair of the sport management department, talked her out of it.

"I was going to focus on school and working," Camille says. "I told myself I was done with basketball. But Dr. Villani convinced me to play. She said 'You have your whole life to work. You don't want to live your life regretting that you had a chance to play the sport that you love, and turned it down.' Now I think about how different things would be if I had had someone else as my advisor, and never started playing again."

And little did she know that as a result of her decision, she would be named captain by women's basketball coach, Chris Mooney.

"She is our leader on and off the court," Coach Mooney says. "She is a great player and a great teammate. She is a pleasure to coach."

"When I was told I was going to be captain I was humbled to think that my coach thinks I'm the kind of person for my teammates to look up to," Camille says. "I feel a lot of responsibility because a captain means that your teammates look at you for direction, so you need to keep a level head and make the best decisions for the team.

"The biggest challenge is that you can't show frustration even when you are frustrated. You need to try and stay positive even when it's hard. If your teammates see that you are down or dragging your head, you can bring the whole energy of the team down."

On the academic side, Camille has set her sights on becoming a sports information director. She recently completed an internship in FSC's sports information department, doing in-game stats for soccer and volleyball home games, and writing press releases for the Rams website.

"Camille is one of the most polite student athletes I've come across," says Deana Ward, FSC's assistant athletic director. "She was willing to help in everything, and wanted to learn all she could to gain experience for her future."

It has had such a big impact on her life that one has to wonder how Camille fell in love with basketball in the first place. It is not a complicated story, she says.

"When I was younger, I hung around with my brother and his friends, and I picked it up from them," Camille says.

And big brother didn't mind his little sister hanging around the court?

"Only when I beat them!" 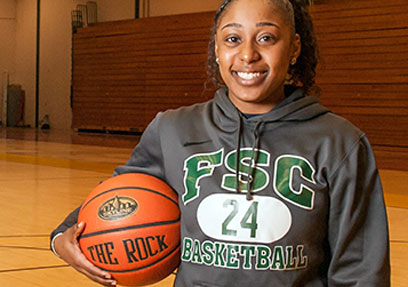