Surya Kumar Prabakaran: In the Spotlight

You think the competition for jobs is tough here? Imagine graduating with an engineering technology degree in India.

According to Surya Kumar Prabakaran, a senior mechanical engineering technology major here at FSC, 300,000 men and women graduate with engineering degrees every year – and that's just in Tamil Nadu, the state he grew up in back home. His father, and many family members, are engineers, so it was natural that Surya go into the field as well. But he didn't want to be just another guy with an engineering education.

That's how he wound up here.

"It is hard to distinguish oneself from the rest of the pack," Surya says – stating the obvious. "But then I stumbled on this program."

He learned about the mechanical engineering technology program from Dr. Kamal Shahrabi, Dean of the School of Engineering Technology, who had gone to PSG College of Technology in Coimbatore, India, to recruit students. Surya was in his third year at PSG, and was impressed with what Dr. Shahrabi had to say.

"He introduced us to the college, and said if you are passionate about engineering, then Farmingdale is the place to be. He said the college was equipped with the latest in-house research facilities, where innovation can truly flourish. That motivated me to choose Farmingdale."

Surya chose Farmingdale over Hartford University, which like SUNY, had an agreement with PSG to award bachelor's degrees to students who first completed three years there. Surya was ready for his American adventure, but it would not be the first time he set foot in the country.

Back home Surya was a member of his local Rotary Club. Each year the international organization selects more than 8,000 students from around the world to study abroad. While in high school, Surya was one of them. It was a dream come true.

"My father works for a company that has many international customers, and after every visit I used to be very excited to hear his tales of the different customs and food, and his experiences in general. I was very excited when I got an opportunity to visit another country."

But Surya didn't wind up in New York, Chicago or L.A. Instead he was placed in Philomath High School, in Philomath, Oregon – population 4,000. It was pure culture shock, given that he grew up in a city of 1.5 million people. But being an adventurous, ambitious guy, he loved it. Not only did he live with two host families during his 10-month stay, but he became friends with the 27 other international Rotary students – representing 19 countries - that were scattered throughout the state.

"Being part of an American family and learning new traditions was really exciting," he recalls. "At school I made lots of friends instantly, and everybody had lots of interesting questions, like 'Do you go to school on elephants?' For which I said 'No, we use motorcycles!'"

Not only did Surya find customs in American households much different than what he'd known at home; school was a sharp left-turn from what he'd grown up with.

"In India you stay in the same classroom, and when there is a different period the professor comes to your class. You do not get up and move around after every class. When the teacher walks in everybody stands up... It is a sign of respect for the teacher. And you would definitely not call your teacher by his name; you would address him as 'Sir.' Those kinds of things might seem small, but it is a big difference to us. Here you can have a friendly relationship with your professor."

And Surya – along with more than 20 other Indian students at FSC – has developed those kinds of relationships.

"The faculty has been extremely kind to us. They have taken such good care of us that we don't even realize we are 10,000 miles away from home. Having such a good faculty allows us to focus our entire attention on the reason we arrived here – that is to study."

Surya graduates in the spring. Not so surprisingly – given the way he describes his experiences in this country in such glowing terms – he plans to stay in America to pursue a career. What is surprising is that, while he plans to finish his engineering technology degree, he intends to seek a job in the financial arena.

"I like to work with people, generating and sharing ideas that are backed by research, and factoring in a bit of gut instinct, and finance is the perfect place for that. I would like to move into investment banking. I believe working on Wall Street requires a combination of hard work, an ability to stay calm while making tough, as well as quick, decisions, and people skills. I believe I possess these traits and that's what makes me qualified to take up the job."

"So, anybody have an opportunity for me? I would love to take it!" 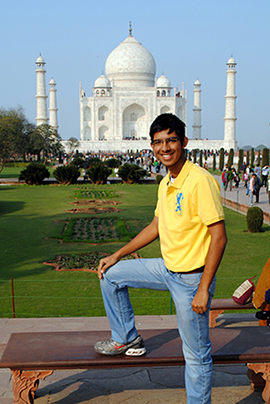