Leemann Bassey: In the Spotlight

Professional Communications major Leemann Bassey got his start in the music business when he met a local musician while working at New York Fashion Week, where he helped set up shows for the fall collections. Leemann expressed interest in the music business, and his new-found friend recommended that he apply for membership in the National Academy of Recording Arts and Sciences – the Grammy Awards folks. He was accepted for membership, and so his writing career was born.

Next—incredibly--he was invited to sit in on an interview with Hip Hop recording artist Danny Brown. It changed his life.

"I was inspired by the whole interview process that took place between the journalist and Danny Brown," Leemann says. "I knew from that point on that music journalism was going to be an area of interest for me."

He got his first break as social media manager for the Noise Collective, the biggest music event company in the country. But he stayed only a few months because he wanted to return to magazine writing.

"I thought I would enjoy doing it as a career," he says.

Next stop was Farmingdale State College, where Leemann decided that a Professional Communications major was best for advancing him in his budding career.

"I thought a Professional Communications degree was more comprehensive than just a journalism degree. It seemed it would make me more employable. I have really benefitted from my journalism and fashion writing classes because they gave me the basic knowledge I needed to write for magazines."

Leemann credits two of his professors with helping him sharpen his skills: Rory McDonough and Howard Gold.

"Professor McDonough's fashion writing class helped me get my first article published, in Fashion Daily Magazine. Professor Gold helped me narrow my ideas, and I found myself writing on more focused topics that gave more relevant and in-depth information to my readers."

"Leemann is an interesting student and strong writer who is not afraid of taking a unique view of his subject. I always look forward to the spark he adds to the class."

Want to get into the music business too? Leemann has some advice for you.

"Networking is the most important thing in the music industry," he advises. "You definitely have to know someone to get in. So make friends."

By the time he graduates this fall Leemann hopes to have published 100 articles on the contemporary music scene. He writes five days a week for MusicHostNetwork.com, a music media site for Indie artists to showcase their music and videos. "Since I am getting ready to graduate, I think this is a good way to rack up my clips to present to prospective employers," Leemann says. 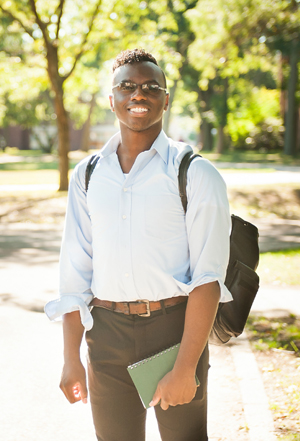