Dylan Sullivan: In the Spotlight

It started for Dylan Sullivan at a very early age; at six years old to be exact.

"I think every child loves to draw. The first moment I knew I wanted to be an artist was when I was in kindergarten drawing a picture of a swan and being praised for how well I drew it," says Dylan Sullivan, one of five Farmingdale State College graduates to have won a Fulbright Scholarship.

Dylan, who graduated in 2010, was an art and graphic design major in the Department of Visual Communications. He discovered that design would be his life's work in his final year of high school, when he attended BOCES to study design and visual communications. After two years at Suffolk Community College – following in his mother's footsteps – he enrolled at Farmingdale, where he saw how valuable the intersection of talent and education was. It started in Professor Thomas Germano's classroom.

"From the first day I met him he always believed I could do great things," Dylan says. "It was because of his honesty and faith in me that I was able to grow into a person that could even consider having a chance to win a Fulbright."

Professor Germano also encouraged Dylan to join the Art Club and travel abroad – both life-changing experiences. "At that point, I knew FSC had possibilities unknown to me that I could benefit from."

Then, through hard work and mind-expanding extracurricular activities – Dylan eventually became the Art Club president - he placed on both the President's and Dean's lists, where he caught the eye of Dr. Beverly Kahn, Farmingdale's Fulbright Program Advisor. Dylan praises Dr. Kahn as both a mentor and an adviser.

"She helped mold me into a successful candidate for the Fulbright Scholarship," says Dylan. "I never would've won without her."

Dylan, who graduated with a 3.68 GPA, built his Fulbright application around getting an MFA in graphic design. His dream was to study at the Academy of Arts in Tallinn, Estonia. There would be no language barrier because most courses offered at the Academy are taught in English. And as a life-long Long Islander (he grew up in Riverhead and now lives in Mastic), Dylan even had a personal reason for choosing that particular eastern European country.

"I knew I wanted a place close to the water, since growing up on Long Island I could never imagine living on the mainland. But really, the Estonian Art Academy was exactly what I wanted." Dylan says the draw also included the fact that, during his first year in Estonia, the country was going to host the European Capital of Culture, a year-long event sponsored by the European Union.

In 2011, after his first year in Estonia, Dylan returned home and hooked up with Robert Vanderhoef, another FSC graduate and former Art Club president, to start their own marketing company: Dedication Graphics (DedicationGraphics.com). Farmingdale and the Academy of Arts, he says, helped him in this career beyond helping him hone his design skills.

"My studies helped me become a better communicator to people of all different backgrounds. Understanding and acknowledging these differences between people is essential to marketing because you need to know who you are selling to."

Even though Dedication Graphics is still a young company, Dylan is already looking at it as a springboard to fulfilling another dream of his: becoming a professor of art and design.

"I definitely want to teach, but right now I know I need to gain more experience in my field so I can prove to my future students that I am a credible teacher."

Given his professional and educational track records, credibility is not something Dylan Sullivan should have to worry about. 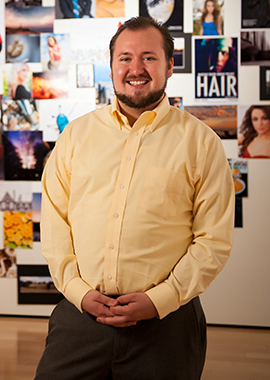