Marc Bauman: In the Spotlight

Most of us are driven either by our right brain or left brain. Marc Bauman, a pre-med student in the health sciences department, believes he is driven equally by both.

And he may be right. Marc wants to become a dentist, which is pure left brain. But he is also an avid musician and music producer who seems to be equally governed by the right brain – the half of the brain that drives creative people. It's an intriguing mix that is setting Marc – who already owns his own recording studio – on two uniquely different career paths. And both, he says, are influenced by his father.

"I discovered my passion for music at the age of seven, when I began learning how to play the drums," Marc says. "My father played the drums as a hobby, and I always enjoyed hearing him let loose."

Marc let loose himself in high school, where he played in the orchestra and the marching and jazz bands. He was so good that he was honored as the most talented student of his graduating class. And he's still drumming, having fun playing along with some of his favorite albums, by bands such as the Beatles, Led Zeppelin and Dream Theater.

He also feeds his passion at House Recording Studios, a facility in Plainview that he opened in 2010, not long after graduating with a degree in music business and audio recording technology from Five Towns College. "The goal of the studio is to provide artists and musicians with a comfortable and inspiring recording experience," says Marc.

Earlier this year, Marc made a life-defining decision to enroll at Farmingdale with a plan to study pre-med on his way to a career in dentistry. He's well on his way too: after not having taken a single science course since 2004, he aced his classes – biology, anatomy and physiology, physics and three chemistry courses - and completed his first semester with a 4.0 GPA. He plans to complete his dental school pre-requisites by next summer and then take the DAT (dental admission test).

Again, as with the drums, he is following in his father's footsteps.

"My dad owned a successful practice for over thirty years," he says. "I always enjoyed visiting his office, watching what he did, how he interacted with his patients. Many of his friends are dentists and all of them are happy and busy doing what they love.

"I like the hours dentists have. Rarely are you on call and once you pay your dues you can maintain a part-time schedule and still make a great living."

"My goal is to pursue my passion for the sciences while continuing to run my music business," he says with the kind of confidence necessary to undertake two career tracks simultaneously. "Music has been engrained in my soul since an early age and being involved with it feels so natural to me. I understand that this will require a lot of time, dedication and work, but I am passionate about both fields. I am diligent about succeeding in each of them" 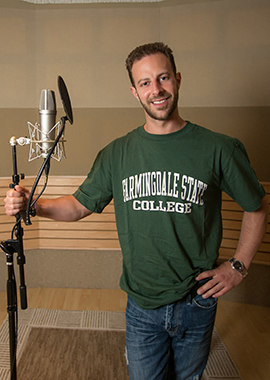