Pride was felt across the campus as Farmingdale State College hosted its 20th Winter Commencement on December 20; pride in accomplishment, in challenges overcome, and in the rewards that hard work and resilience yield.

About 500 students and their guests attended the ceremony in Nold Athletic Complex.

“It is such a beautiful day,” said Sophia Lalanne of Elmont, whose daughter Anne-Sophie received a degree in Nursing. “To see all the kids graduating today, it is such a blessing, such a privilege—not all kids can do it.”

At a time when the value of a college education is coming under scrutiny, FSC continues to be an investment that launches successful careers. “You, and those who came before you, are the reason that FSC graduates stand out as stellar examples of the value of a college degree and an example of the promise of higher education,” College President Dr. John S. Nader said. “FSC truly exemplifies that original SUNY vision by serving students who are talented and motivated and simply need the opportunity to succeed.”

Dr. Patricia Hill Williams, Chairperson of the College Council, reminded students they are graduates of one of SUNY’s best colleges in the region. “We know you will do us proud.”

The winter class of 2022 stayed the course, even through the disruptions of the COVID-19 pandemic. “You have persisted and succeeded during a time that was among the most difficult in the modern history of higher education,” Nader continued. “Your stories and experiences are nothing short of inspiring.”

Some fought, and continue to fight, private battles. Valedictorian Alexander V. Kowalski, a Computer Programming and Information Systems major from Seaford, said he felt unmotivated and depressed when he began college, unsure any of it really mattered, and struggled with anxiety as he compared himself to peers who seemed to be adjusting better than he was.

His solution, Kowalski said, was to write down one reason to live every day. “Most of them were things like waking up on a day off, hanging out with friends, or eating a good medium-rare cheeseburger,” he said. “This only took 10 seconds every day, but I believe it was the best thing I’ve ever done for my well-being. It helped me to not compare myself to others and instead focus on improving my life so that I could live as a person who can continue to experience each and every one of those reasons to live that I’ve written down. Today, I wrote my 1,233rd reason to live, and it was experiencing the feeling of love.”

Kowalski urged his classmates not to be too hard on themselves. “In a perfect world, the only person we would compare ourselves to, is ourselves,” he said. “Unfortunately, this isn’t a perfect world. If you still aren’t exactly sure of the career path you want to follow with your degree, you’re doing okay. You aren’t any less valuable than the people around you. You all have reasons to live and thrive, just like me. Sometimes we just need to remind ourselves of that...

“I’m going to end this speech by saying something that many of you have probably heard before, but in case some of you haven’t or feel like you haven’t heard it enough, I just want to say that I'm proud of each and every one of you for being here.”

Many other graduates' lives also made for inspiring stories; among them a first-generation Bioscience student who was the son of immigrants from El Salvador, Nader related, who'd suffered unimaginable tragedy in February 2021 when both of his parents died of COVID-19, only 18 days apart. Despite that, he was able to resume his studies that fall, excel in his schoolwork, pursue photography, and volunteer to teach children at his church.

Another, shortly after transferring to FSC, dove into campus life by pursuing efforts to raise awareness and acceptance of the LGBTQIA+ community as well as issues related to mental health. He later served as a senator for the Student Government Association and as the vice president of the Health Promotion and Wellness Club. “He created and passed resolutions that improved student life and secured funding for public health programming,” noted Nader.

Yet another graduate, a first-generation student who came to the U.S. at the age of 4 took advantage of every opportunity at FSC, including participating in the Collegiate Science and Technology Entry Program (C-STEP), and landing an internship this past summer at PricewaterhouseCoopers, which resulted in a job offer.

Additionally, another first-generation student from a single-parent family transferred to FSC in 2019 and put in long hours as a student worker in the Academic Advisement and Information Center as well as in the Tutoring Center as a success coach, working closely with students to provide academic support and guidance, Nader shared. Her efforts earned her the Employee Student Service Award.

“Collectively, they reveal that FSC students really are different in the challenges they face, and the drive they exhibit,” according to Nader. “They are more likely to commute, and to work and to help support family members. They excel at applying what they’ve learned at Farmingdale and they often do all of this while serving the broader community.”

All the more reason for the pride overflowing in Nold. Ana Rivera from Valley Stream, whose daughter Rachell got a degree in Bioscience, said opportunities at FSC allowed her daughter to conduct research in Wisconsin. “It’s been a long road,” she said. “We’re very proud and excited.”  Rachell’s sister Kimberly, ’19, now an emergency room nurse, said Rachell plans to earn an advanced degree.

Holding flowers and a teddy bear, Theresa and Ronnie Galli of South Hempstead waited eagerly before the ceremony to see their daughter Eva receive a degree in Computer Security Technology. She begins work in a few weeks; an internship at Cantor Fitzgerald in New York City led to a job offer. “I can’t believe how time flies,” Ronnie Galli said.

Sophia Lalanne, whose daughter already has a job at a hospital, said it has been her daughter’s goal since she was young to be a nurse. “If you want to be a success in life, love what you are doing,” she added. Her daughter saw children suffering in their native Haiti and someday would like to return there to help them.

For some, careers have already launched. Dynavia Nimmons of Brentwood, an Aviation Administration major, is managing operations at a flight school. “I’m excited and happy it’s done,” she said of her education. “I liked my program because it was small and the professors were great and really wanted you to do well.”

Olliver Rivera of White Plains, an Industrial Technology-Automotive Management Technology major, has a job waiting for him as a technician at a car dealership. “Now it’s time to save up for my dreams,” Rivera said. “A car, a house, a family.” 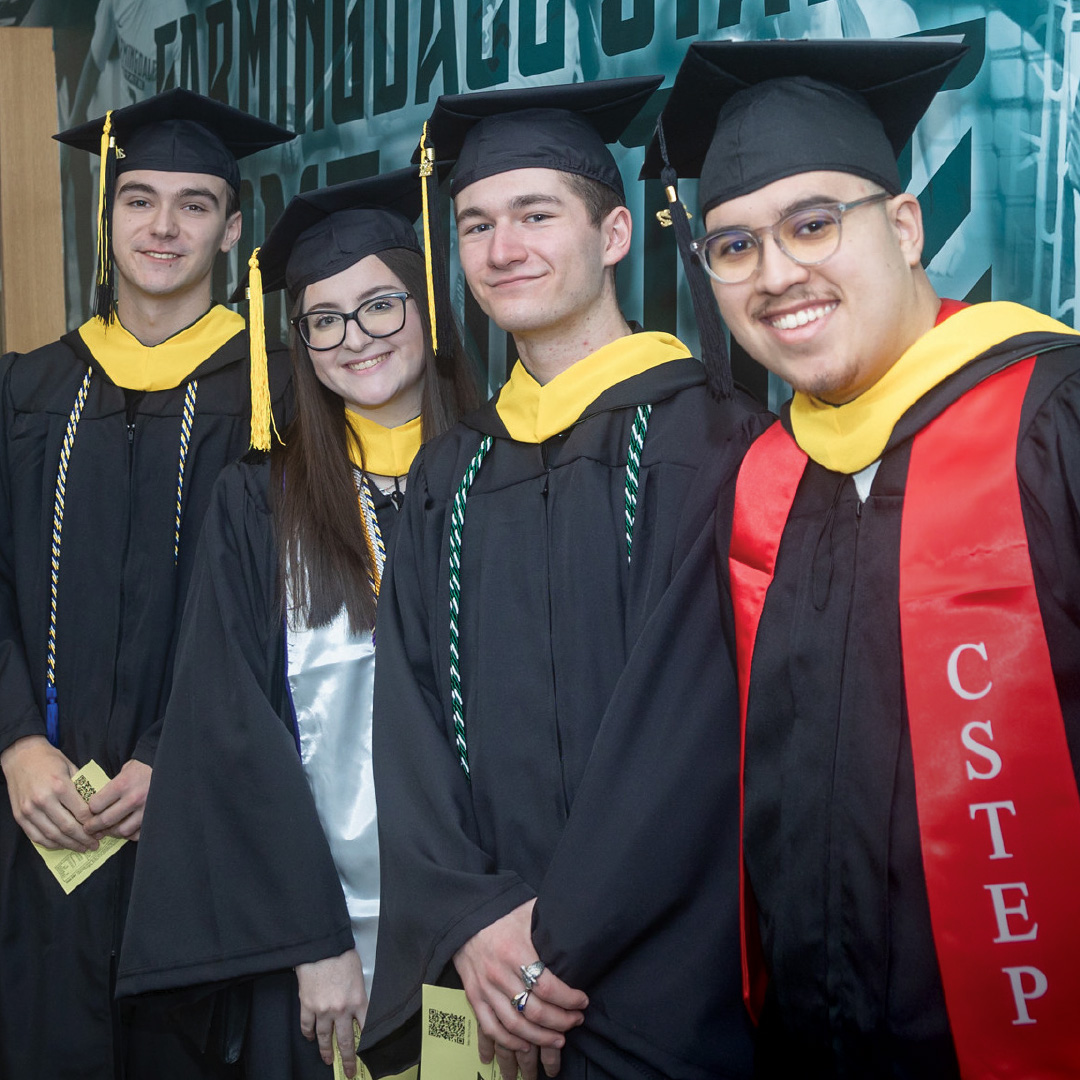