John Guido '00 takes the helm, ready to reach out

After years of devoting time to different Long Island organizations, including one he founded, John Guido, FSC ’00, decided he wanted to make more of a difference at his alma mater.

Guido joined the FSC Alumni Association and not too long after, went from writing checks to helping with events, and soon took a bigger leap. In June, he started his term as the new president of the FSC Alumni Association Board of Directors. Guido earned a B.S. in industrial technology and facility management while at FSC and works as a senior manager at JLL in Melville. He first started at Farmingdale in 1986 and played on the baseball team, but was forced to leave school before completing his degree.

Besides serving on the Alumni Board since 2019, Guido has been a member of the Construction Management Advisory Board for five years. “John is an ideal ambassador for the Alumni Association with his deep ties to the school and extensive partnerships within the local community,” said Matthew J. Colson, vice president for development & communications. “We look forward to his leadership in the years ahead and welcome him in this new role.”

Volunteering practically has been a second career for Guido. He is the founder and executive director of the Jane Guido Foundation, which assists those facing food insecurities; he has served as president of the Sound Beach Property Owners Association, and has been involved with Little League. He and his wife, Kristine, live in Sound Beach and have two grown children and one granddaughter.

Expanding the size and activity level of the Alumni Association is Guido’s primary focus. “Currently there are about 100,000 alumni worldwide, and I’d like to get more people involved,” he said. “We want to show what we can do for students, in terms of networking, experiences, and scholarships. We’re trying to re-engage with people out of the state and out of the country and encourage staff to meet with alums while traveling.”

Also, getting fewer alumni to pitch in more could have better results than having larger numbers helping a little, Guido added. “There are good concerted efforts going on to get the information out.”

He’s started exploring ways to get people together. “We’re encouraging active alumni to reach out to people who are not as active. I’m meeting people I haven’t seen before.”

Guido praised Colson and Michelle (Johnson), director of alumni engagement and stewardship, for fostering a welcoming atmosphere for graduates. “Matt and Michelle offer a comfort level that make you want to be there,” Guido said. “The more people we have, the bigger the plans. I want to try to get younger alums involved as well.” Part of the reason recent alumni are not as involved is that they are busy starting careers and families, he noted.

But the fact that so many alumni returned for a commencement ceremony in May one or two years after they completed their degrees showed a strong connection to the college. “I was moved to see the number of people who came back, about 400,” Guido said. “It showed Farmingdale made a mark on them. It’s always harder to get people back after they leave, especially because so many were commuters and are more transient. But in just over the past five to eight years, the college offices have done a great deal more to reach out.”

Getting more alumni involved with students also can be transformative. “I want to see it (the alumni association) grow so we can give more support to the students,” Guido said. “I hope I can do what they did for me for someone else.” 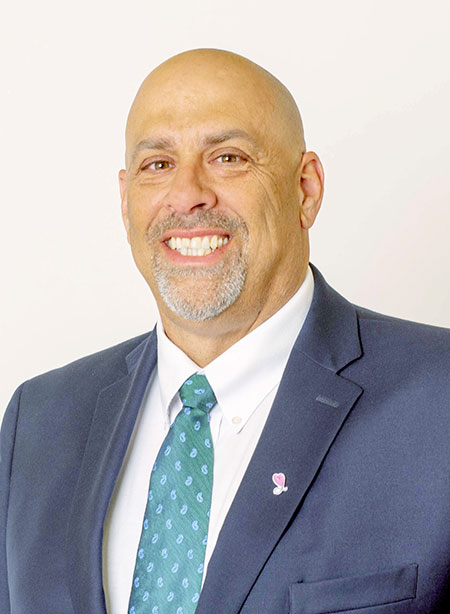