If anyone was due for a celebration, it was the Farmingdale State College Class of 2022. After having their academic and personal lives disrupted for two years by the pandemic, a gathering at Farmingdale’s outdoor athletic complex for a “normal” graduation May 26 was in itself a triumph.

Adding to the festivities, the Navy’s acrobatic flying team, The Blue Angels, visiting Long Island for the Jones Beach Airshow May 28 and 29, made a few passes over the field.

Parents and students rejoiced over the return of in-person commencement ceremonies. “We’re just so happy he can have a normal graduation,” said Demetrious Frascino of Massapequa Park, who was there with his wife, Debbie, to see their son Brandon graduate. “It’s a wonderful day, we’re very proud,” said Debbie Frascino. “We’re very excited about his future.”

Graduation was especially meaningful for the Gayle family of West Babylon, whose daughter Jasmine received a degree in criminal justice/law enforcement technology. Jasmine was a premature baby, her mother Natalie said, and needed support services growing up. “We are just so proud,” Natalie Gayle said. “She has exceeded expectations. She was able to persist and make this happen.”

Multiple speakers praised the students’ resilience and flexibility during the worst of the Covid-19 pandemic and how they kept going despite the many obstacles.

“Living in extraordinary times might make it seem like much has changed”, Nader said. “There remains one overriding constant: the students whom we honor this week are—individually and collectively-- extraordinary people,” he continued. “As an institution, we have never been prouder. Perhaps no group of students has ever displayed such persistence and perseverance on the path to their degrees.”

Director of Alumni Engagement and Stewardship Michelle Johnson welcomed the newest FSC alumni and said adversity made their accomplishments even sweeter. “We are truly honored to be here today to celebrate this monumental achievement with all of you, and we couldn’t be prouder of the way you all pulled together during these challenging times,” Johnson said.

The Class of 2022 should be entitled to put front-and-center on their resumes, “I made it through 2020. Enough said,” joked commencement keynote speaker Rushi Kota, FSC ‘09, an actor who has appeared on TV shows including Grey’s Anatomy, Ordinary Joe, and Never Have I Ever on Netflix.

Kota came to FSC to study automotive engineering, but his interests changed. A family financial crisis pushed him out of his comfort zone, he said, forcing him to become more self-sufficient and innovative to continue his education, and be open to new opportunities.

Farmingdale provided him with a formative moment when he was a resident advisor. Nineteen Chinese international students that were affected by massive earthquakes that devastated their homes in the Sichuan province of China were calling Farmingdale home. “I had the honor and privilege of being their student body liaison through the resident assistant program,” Kota said. “I learned about the tragedy they went through and how they overcome those odds to not give up and still find ways to make something of themselves. The resilience of their drive had an effect on me.”

With no job prospects after graduation, Kota turned to a modeling agent who had given him a card two years earlier, and landed a small part in a far-off-Broadway play. A talent agent spotted him and encouraged him to take acting lessons. He completed an MFA in acting from Harvard University, but even with that, it took him more than four years to get his first big part.

While it took a crisis to help him set goals, everyone has that capability, Kota said. “You don’t need some sort of major event to happen to you, in your life, to find your way,” he said. “That ambition is in all of us and you should be fearless to go after what you really, really want.

“…It’s okay to be lost and not know all the answers,” he continued. “Because when you get lost, you start asking the right questions and that’s when you start finding your path forward.”

Remember that a disappointment could turn into an opportunity, valedictorian Thomas L. Febbraro of East Islip, a mechanical engineering technology major, counseled his classmates. He ascribes to the idea that everything happens for a reason. Febbraro nearly dropped out of Farmingdale the last semester to take a job he had wanted for two years. As he was about to start training in April, the offer was rescinded.

When he got the news about the job, his mother told him not to worry, apparently it was not meant to be. The next week, he learned he was a candidate for valedictorian, and a month later, that he would indeed receive that honor.

“If I got that job, I would not be standing up here today,” Febbraro said. “What I want you all to take from this is that even though things may seem bad in the moment, everything happens for a reason. The reason may not be immediately clear, but it is all preparation for what's to come.”

In the moments after graduation, the atmosphere radiated positivity, as students were embraced and photographed by family and friends.

“It’s a very special day, and all the hard work paid off,” said Travis Angus of North Amityville, who received a degree in sports management. “And all my people are here.”  Angus said he plans to get a master’s degree in sports administration.

Surrounded by joyful family members, Starr Raymond of Bay Shore, wearing a first-generation stole, said now that she has earned a degree in science, technology and society, she plans to enter an accelerated program to get her bachelor’s in nursing. The diversity of the student body and the helpfulness of the advisors make Farmingdale special, she added.

“She is self-motivated,” her father, Steven Broda, said. “She is the first one in the family to graduate from college.” Vanessa Broda added that her daughter was born when she was very young. “I’m just so proud of her,” she said. “Everything I sacrificed for her, she has made up for.”

Nearly 400 alumni returned to campus for the ceremony. “Although untraditional in the sense that we congratulated four classes of graduates all in one evening, it was a much-anticipated celebration that our alumni and their loved ones deserved and enjoyed,” said Michelle Johnson, the director of Alumni Engagement and Stewardship. “We welcomed our pandemic grads into the Farmingdale alumni family with all of the pomp and circumstance that they would normally receive.”

Graduates were invited to an after party at the Hilton Long Island Huntington.

“Thank you so much for all of your dedication to this; it was a fantastic ceremony and I couldn’t be happier to have been a part of it,” alumnus Paul Conroy wrote in a message to the alumni office. “I will be sure to be in touch with the alumni association now and in the years ahead. Thanks again!” 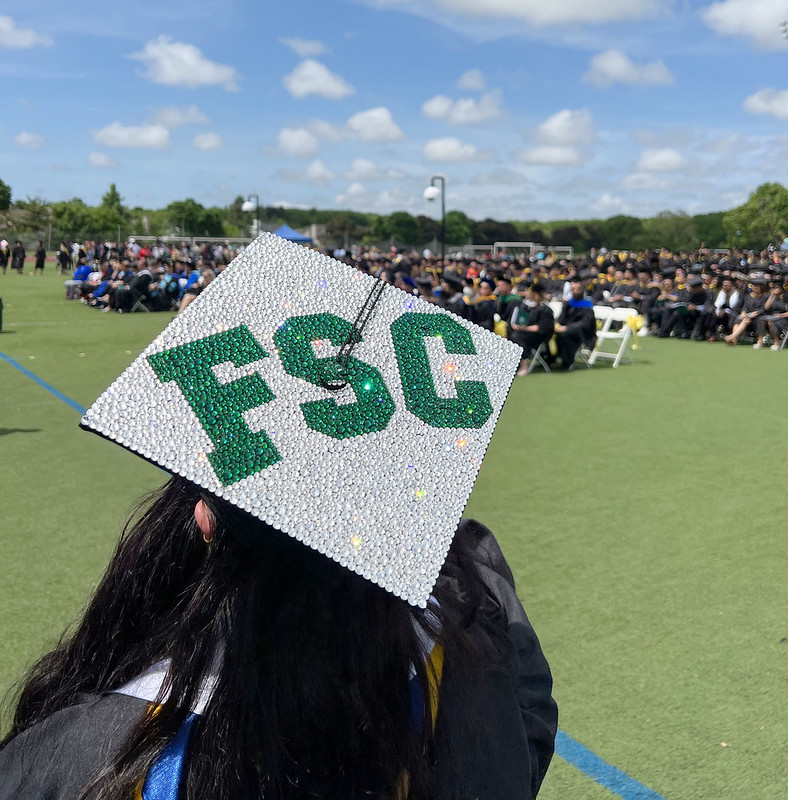