“Chris Malone’s passion for student success coupled with his vast experience in working with underrepresented minority students will further the work of the Provost’s Office,” says Dr. Joseph. “His creativity and deep understanding of public higher education brings new perspectives on which to build future programing in support of our students and faculty.”
"I am honored to join the Farmingdale community as Associate Provost, and I look forward to tackling the meaningful work ahead with Provost Joseph and the rest of her team in Academic Affairs.” Says Malone. “As a product of public higher education myself, I understand the sacred obligation public colleges like FSC hold to transform the lives of our students and to serve the broader society through our mission.  We do that best when we make good on the Farmingdale motto: Let each become all one is capable of being. And I am grateful for this opportunity to help our students and faculty reach their potential, and reach for greatness."

Christopher Malone has a quarter century of experience in higher education and public service.  Before coming to Farmingdale, Malone served as the Founding Dean of the School of Arts and Sciences at Molloy College.

Malone has worked in and around politics throughout his entire career. He managed his first political campaign in 2000 and has been sought out as a consultant to numerous political leaders and candidates since that time. Malone's academic research lies in the field of race and American political development, political participation, and civic engagement. 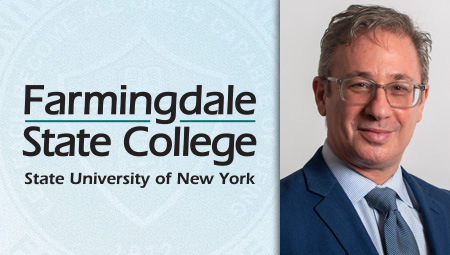