"Our story is one of student success," Dr. Nader said. "Farmingdale is thriving academically and in robust enrollment. But if we are going to serve more qualified students—and we certainly want to do that—in order to remain both inclusive and selective, we need additional space to accommodate the overwhelming demand due to our popularity."

In fact, Farmingdale ranks 8th nationally in percentage of enrollment growth (47.6 percent) from 2006 to 2016, according to a study conducted by The Chronicle for Higher Education. With over 10,000 students this Fall, the College ranks second in undergraduate enrollment among Long Island colleges and universities.

Farmingdale's overall employment rate of graduates is impressive. In a survey of 2017 graduates, 90 percent of respondents reported they were employed within six months of receiving their diplomas. And a 2018 study conducted by the Long Island Association revealed that the College's economic impact on Long Island from 2009 to 2017 was $2.51 billion.

Farmingdale estimates the cost of the proposed building at $53 million; it would take three years to construct. Nader said the plan has support from key legislators and hopes they will be successful in advocating for funds to be included in the next state budget. "Clearly, we are a success by any measure," Dr. Nader said. "I hope the state thinks we are a good investment because of that success." He projected that with a new building, Farmingdale could grow its enrollment to more than 11,000 students.

The College also introduced six new academic programs that are designed to meet the demand in emerging fields, using the theme "The Future is Now." In addition to GIS, Farmingdale is beginning to offer degree programs in Business Analytics, Computer Security Technology (CST), Health Promotion and Wellness, Nutrition Sciences, and Interaction Design. The Business Analytics, GIS, and Health Promotion and Wellness programs are the only ones offered on Long Island; the CST program is the only one offered in SUNY.

"State officials are impressed with our success," Dr. Nader said. "Investing in a new building will allow us to thrive for years to come." 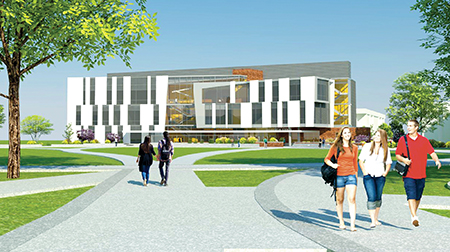