She's a comedian, writer, actor and director. She has been named one of the "50 Funniest Women" by Huffington Post and one of the "10 Best Feminist Comedians" by Paper magazine.

She's Negin Farsad, an Iranian-American Muslim who has made a career of making people laugh – and think – about national and international social justice issues. She will appear at Farmingdale's Little Theatre at Roosevelt Hall, Tuesday, 4/24, 11 a.m. – noon. The public is invited and the event is free.

Farsad is the author of How to Make White People Laugh (Grand Central Publishing, 2016), and works very hard at doing that. As she wrote in the Boston Globe: "It's not just a funny title. My whole career has been me trying to figure out how to make white people laugh."

As one of only a few Iranian-American Muslim female comedian/filmmakers, Farsad uses humor to bridge racial, religious, social and immigrant gaps. Negin has devoted much of her career to social justice comedy, addressing serious issues such as Islamophobia, immigrant rights, bigotry and any general lameness foisted on people because of race, religion or socio-economic class.

"Negin Farsad is a comedian sui generis," says Dr. Michaela Porubanova, assistant professor of cognitive psychology and chair of the College's Artist and Lecturers Program. "She fights for social justice and eliminating misconceptions, particularly about Islam, while making people laugh. In this cultural moment, it is crucial to bring speakers like her to campus and to have our ideas about the world challenged – and to have a laugh." 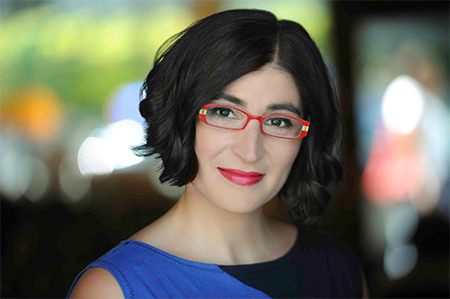