SUNY Board of Trustees Appoints Dr. Kristina M. Johnson as the 13th Chancellor

The State University of New York Board of Trustees today announced the appointment of Dr. Kristina M. Johnson as the 13th chancellor of SUNY, the largest comprehensive system of public higher education in the United States.

"Throughout her distinguished career, Kristina Johnson has not only been a faculty member, administrator, and visionary in higher education but also a dedicated public servant, national energy czar, successful entrepreneur, and an acclaimed inventor," said SUNY Chairman H. Carl McCall. "We are thrilled to welcome her to SUNY, where her range of experience will enable her to leverage the incredible work of our 64 colleges and universities. On behalf of the SUNY Board of Trustees and Search Committee, I want to thank Governor Cuomo, whose commitment to public higher education helped us to attract a top candidate, and Nancy Zimpher, whose leadership of SUNY over the last eight years has raised the profile of this position to an all-time high."

"Dr. Johnson is a proven leader and innovator whose cross-sector experience and strong belief in the power of education will be a great benefit to The State University of New York," said SUNY Chancellor Nancy L. Zimpher. "In academia, she has brought stakeholder groups together to create and implement strategic vision crafted at the hands of many. On the national forefront, she successfully managed and uplifted our country's most advanced energy research. And as a former faculty member turned entrepreneur, time and again she has bridged the gap between higher education and business to create programs that prepare students for in-demand careers. The future of SUNY is indeed bright under the leadership of Dr. Johnson."

"The State University of New York is a complex, captivating system like no other in higher education, and the opportunity to serve as its chancellor is the highest honor of my career," said Dr. Johnson. "I look forward to building on the excellent foundation for SUNY that Governor Cuomo, Chancellor Zimpher, and the Board of Trustees have developed in partnership with SUNY presidents, faculty, staff, and students as well as the communities they serve in every region."

Dr. Johnson is the current founder and chief executive officer of Cube Hydro Partners, LLC, which develops hydroelectric generation facilities that provide clean energy to communities and businesses throughout the country. She was appointed by President Barack Obama as U.S. Under Secretary of Energy and served as Johns Hopkins University provost and senior vice president for Academic Affairs, dean of the Pratt School of Engineering at Duke University, and professor at the University of Colorado-Boulder.

Throughout her career, Dr. Johnson has been an advocate for women in leadership, advanced STEM and STEAM education, pioneered the creation of jobs through higher education-industry partnerships, established intensive research opportunities for students and faculty, and positioned leading institutions of higher education for greater success through the development of innovative strategic plans.

Chancellor Zimpher will step down from the position in June 2017 after an eight-year term during which she has positioned the university system as a national model through an unprecedented partnership with Governor Cuomo. Dr. Johnson's appointment as chancellor is effective September 5, 2017, at an annual state salary of $560,000. Interim leadership for the period between June and September will be appointed by the SUNY Board of Trustees at its June 21, 2017, meeting.

Dr. Johnson received her B.S. with distinction, M.S. and Ph.D. in electrical engineering from Stanford University. After a NATO post-doctoral fellowship at Trinity College in Dublin, Ireland, she joined the University of Colorado-Boulder's faculty in 1985 as an assistant professor and, later, full professor. From 1994 to 1998, Dr. Johnson directed the NSF/ERC for Optoelectronics Computing Systems Center at the University of Colorado and Colorado State University.

As dean of the Pratt School of Engineering at Duke University from 1999 to 2007, Dr. Johnson created intensive student/faculty research partnerships and led a strategic planning process, "Building on Excellence," which established new cross-disciplinary research programs while also increasing undergraduate enrollment by 20 percent, doubling the number of graduate students, tripling research expenditures, and tripling the university's physical infrastructure through the design and construction of the world-class Fitzpatrick Center for Interdisciplinary Engineering, Medicine, and Applied Sciences.

Additionally under her leadership at Duke, endowment increased tenfold under the Campaign for Duke University, and the Blue Devil (Venture) Fund was established to support the Pratt School of Engineering. She worked closely with Pratt School of Engineering faculty and department chairs to increase the percentage of women faculty from 6 to 19 percent, hiring 55 faculty during her term, including 19 early career award winners, one elected to the National Academy of Engineering, and one nominated for the Nobel Prize in Physics.

As provost and senior vice president for Academic Affairs at Johns Hopkins University from 2007 to 2009, Dr. Johnson was second-in-charge of the university with direct oversight of the academic operations and budget of nine schools that included leading interdisciplinary programs, academic centers, and institutes. During her term, she led a university-wide strategic planning process, "Framework for the Future," and bolstered leadership in research, new initiatives, and graduate programs, including the creation of the Mosaic Initiative to recruit outstanding faculty, launch of the Discovery Grant Program for faculty-led initiatives, and management of the university's ten-year accreditation review.

Named an NSF Presidential Young Investigator in 1985 and a Fulbright Faculty Scholar in 1991, Dr. Johnson's academic awards include the Dennis Gabor Prize for creativity and innovation in modern optics (1993) and the John Fritz Medal (2008), which is widely considered the highest award in engineering, as previous recipients include Alexander Graham Bell, Thomas Edison, and Orville Wright.

Dr. Johnson was inducted into the Women in Technology International Hall of Fame (2003) and the National Inventors Hall of Fame in 2015. She received the Society of Women Engineers Lifetime Achievement Award (2004), the ARCS Foundation Eagle Award for science and education (2009), and the Woman of Vision Award for Leadership by the Anita Borg Institute for Women and Technology (2010). She holds 42 U.S. patents, has published 149 referenced papers and proceedings, and received honorary degrees from University of Alabama a Huntsville, Tufts University, McGill University, and Trinity College, Dublin.

Recognized for her work in technology transfer and entrepreneurship by the states of Colorado and North Carolina, she received the 2010 Milton Steward Award from the Small Business Technology Council (SBTC), and is a fellow of the Optical Society of America, International Electronics and Electrical Engineering (IEEE), the International Society for Optical Engineering (SPIE), and the American Association for the Advancement of Science (AAAS).

Dr. Johnson is married to Ms. Veronica Meinhard, the Senior Executive Director of Principal Gifts and Senior Associate Athletic Director at the University of Maryland, College Park (UMCP). Previously, Ms. Meinhard worked for 21 years at the University of Florida in various capacities in University Development and Alumni Affairs. 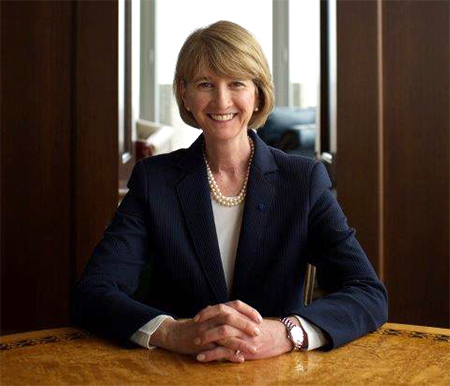