"Ballin' to Protect Young Hearts":  The DomHeart 21 Classic, is a basketball tournament - but more than that it's a tournament geared to save lives.  And it's coming to Nold Hall at Farmingdale State College on Saturday, June 4, beginning at 10 a.m. and running through the afternoon.

Named after Dominic A. Murray, a former Farmingdale student who died of sudden cardiac arrest (SCA) during a pick-up basketball game here in 2009, the event’s goal is to raise awareness of SCA - the #1 killer of student athletes in the U.S.  The annual tourney features ballplayers 15 and under who will compete for an automated external defibrillator (AED) for their school.

Organized by Ms. Melinda Murray, Dominic's mother, the Classic will feature eight boys and girls AAU teams from the Tri-State area.  All tournament coaches, players, referees, and volunteers will be trained in life-saving CPR-AED skills, and educated on recognizing the signs of sudden cardiac arrest and how to respond in an emergency situation.  Members of the public that attend the tournament will be offered the opportunity for free training as well.

To date, the Foundation has helped train more than 7,000 students and young adults in CPR-AED skills and provided free cardiac screenings to 3,000 student athletes.

“Dominic’s death could have been prevented through early detection and awareness,” Ms. Murray says. “Now we have to educate others on what sudden cardiac arrest is and how to do CPR. I thank FSC for helping me do that.” 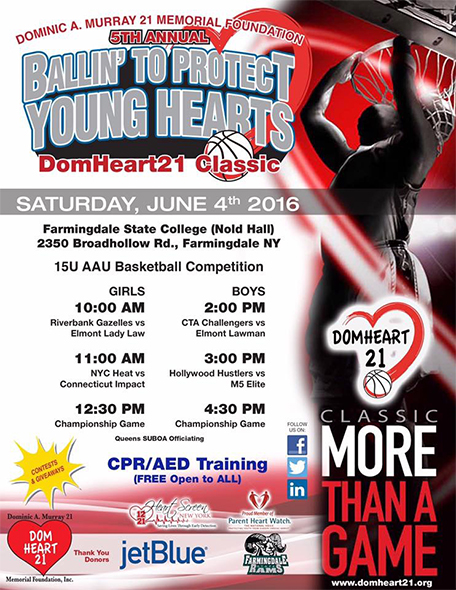