Samuele Riva, who graduated this spring as valedictorian, and Tatiana Rosamilia, a junior, are winners of SUNY’s 2016 Chancellor’s Scholar-Athlete  Award.  The Chancellor’s Award honors students who have best demonstrated and been recognized for their integration of academic excellence with other aspects of their lives, which may include leadership, campus involvement, athletics, career achievement, community service or creative and performing arts.

Riva was a sport management major, and the first student from Italy to graduate from Farmingdale.  He did it in just three years, with a near-perfect GPA.  Among his achievements:

Rosamilia is studying liberal arts & science, and has been a member of the women’s tennis team for the last three years.  She holds many records, including: 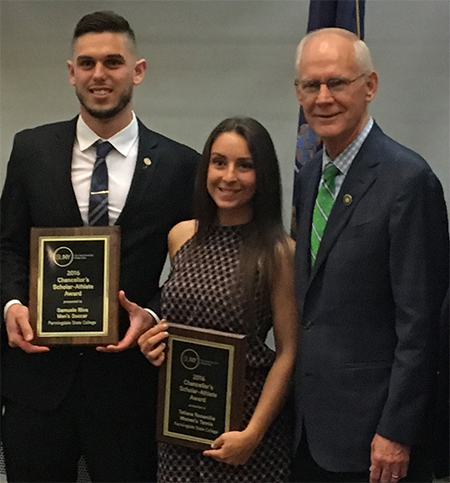