"Unnecessary Farce," a critically acclaimed screwball comedy that has been performed on stages from Syracuse to Singapore, is coming to Farmingdale State College for three nights: March 31 - April 2, in the Little Theater at Roosevelt Hall.

All shows, mounted by the college’s Backstage Theater Company, begin at 8 p.m. Tickets are $10 and must be purchased in advance, at  https://epay.farmingdale.edu/C21458_ustores/web/store_main.jsp?STOREID=5&SINGLESTORE=true Admission is free for Farmingdale students with a valid ID.

Brooklyn playwright/actor Paul Slade Smith, on the play’s website, describes the plot this way: “In an economy motel room, an embezzling mayor is supposed to meet with his female accountant. In the room next door, two undercover cops are supposed to catch the meeting on videotape. But there's some confusion as to who's in which room, who's watching the video, who's taken the money, who's hired a hit man, and why the accountant keeps taking off her clothes.”

"Unnecessary Farce," winner of nine regional theater awards, has received rave reviews across the country.  The Boston Globe said it had an "unrelentingly funny plot," and the theater critic for the Post-Standard in upstate Syracuse said it was "The funniest two hours of theater I have seen in several years." 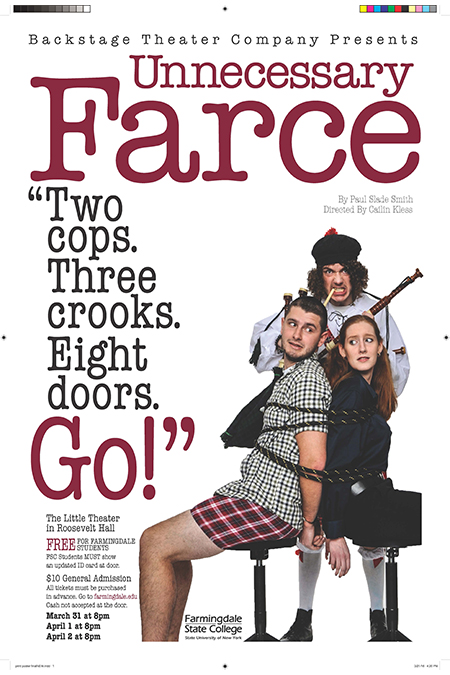