Farmingdale State College’s annual Alumni Awards Dinner has been scheduled for March 31, 2016, at the Crest Hollow Country Club in Woodbury. Highlights of the event will be the presentation of a Lifetime Achievement Award to Farmingdale President Hubert Keen and the Judith M. McEvoy Alumnus of the Year Award to world-famous comic book illustrator John Romita Jr. ’76.

To order tickets, make a gift to the Alumni Association, or reserve advertising space in the awards journal, visit the Alumni Website.

Dr. Keen, who is stepping down from Farmingdale next June after nine distinguished years as president, will be presented his award by SUNY Chancellor Nancy L. Zimpher. Romita is being honored for his award-winning achievements in the comic-book field, where he has drawn iconic characters such as Spider-Man, Superman, the X-Men, Daredevil, and Iron Man over a 40-year career.

Dr. Keen became President of Farmingdale State College (SUNY) in January 2007, having served for two years prior as Provost and Vice President for Academic Affairs at Farmingdale.

During his tenure, Farmingdale’s enrollment has grown to almost 8,600, the campus has embarked on a $185 million construction and renovation project, and academic programs have been expanded. New buildings include a Campus Center, Children’s Center, and School of Business building.

He has been awarded numerous fellowships, including the Fulbright. He serves on the boards of the Advanced Energy Research and Technology Center, the Long Island Regional Planning Council, and the LI Index Advisory Board. In addition, he chaired the Long Island Regional Advisory Council on Higher Education Presidents-Superintendents Group and served as LIRACHE chair.

Dr. Keen earned the BA in Biology from Pikeville College, the MS in physiological ecology from Eastern Kentucky University, and the PhD from Kent State University in ecology.

Romita – known in the industry as JRJR – studied advertising art and design at Farmingdale from 1974 – 1976. About his time at Farmingdale, he says: “It was a great curriculum and played to what I liked. It was more than I could have imagined. There was a commonality between the design I had been directed toward at school and the overall panel designs in illustration. There was a common ground that opened my eyes. I said ‘I get this. I get it.’”

Romita began his career at Marvel Comics in the late 1970’s, drawing a short Spider-Man story called “Chaos at the Coffee Bean!” From there he moved to Iron Man and soon became Spider-Man’s regular illustrator, following in his father John Romita’s footsteps. During more than 35 years at Marvel he penciled most of Marvel’s top-line characters. In 2014 he created an uproar in the comics world by jumping from Marvel to its archival DC Comics, to draw Superman. Romita has been recognized with Inkpot and Eisner awards, and holds a Guinness World Record, for 48 hours of continuous cartooning to raise money for his niece, Jordan, and other children suffering from cancer.

Also being recognized is Philip Simone, adjunct associate professor of visual communications and director of FSC's Memorial Gallery. He is the recipient of the Distinguished Faculty Award.

Professor Simone has been an adjunct faculty member for 14 years. He teaches numerous courses, including Editorial Design, 3D Design, Typography, and Graphic Design/Design Production. His professional background includes stints at Hearst Corporation and Time Warner, where he was design director for People magazine.

Two long-time and outstanding members of the campus community - Judi Cestaro '92 (transfer services) and Jack Petrich '69 (physical plant) - have been accepted into the Centurion Club, which recognizes the top 100 alumni of the past 100 years.

This year's Outstanding Student of the Year Award goes to Adrianna Gibaldi ’15. Adrianna had a distinguished career at Farmingdale, where she was president of the Rambassadors (she held five other positions with the group), FSC's student leadership program. She was president of recruitment for Sigma Delta Tau, and a member of the Advertising Committee for the Campus Activities Board. She earned a BS in Professional Communications and Business, with a minor in Organizational Leadership. She is currently a marketing communications intern at Veeco Instruments, Inc. 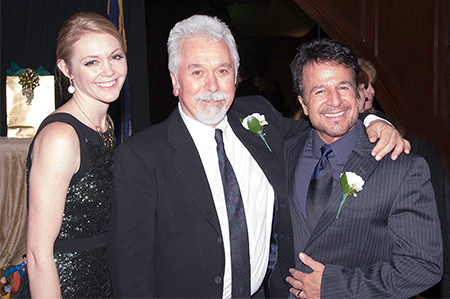