Multi-award-winning graphic designer Chip Kidd will speak at Farmingdale State College on Tuesday, March 10.  The lecture is being held in Gleeson Hall, Room 104, from 3:05 – 4:20 p.m.  Admission is free and the public is invited.

A vast cross-section of Kidd’s work will be on display through April 17, in the Memorial Gallery in Hale Hall.  Admission is free.  Gallery hours are 10 a.m. - 4 p.m., weekdays.

Kidd is the associate art director at Knopf, where he designs book jackets.  He is prolific, producing about 75 covers a year.  USA Today called him “the closest thing to a rock star in graphic design today,” while Publishers Weekly said that his “creepy, striking, sly, smart, unpredictable covers make readers appreciate books as objects of art as well as literature.”

Kidd, on the other hand, poo-poos the idea that book jackets sell books.  “I’m very much against the idea that the cover will sell the book.  It’s about whether the book itself really connects with the public, and the cover is only a small part of that.”

Either way, Kidd has had tremendous influence on modern graphic design.  He supervises graphic novels at Pantheon books, and has freelanced for Amazon, Doubleday, HarperCollins, Penguin/Putnam, and Farrar Straus & Giroux.  He has also written and designed book covers for DC Comics.  In 2001 he published his first novel – The Cheese Monkeys – about his experiences as a design student at Penn State.  The Learners was the follow-up book.

Not content with just graphic design, he also writes and records rock music under the name Artbreak.  He sings and plays percussion too. 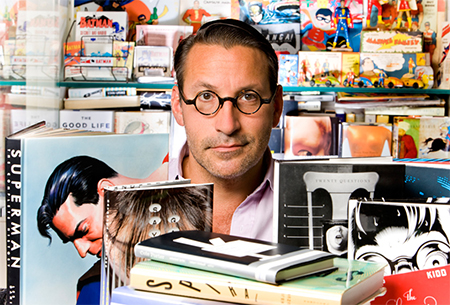