Have a weather app on your iPhone?  Take a look, it may be Weather Reader.  If you do, you’re using a new app created by a fellow SUNY student.

John Scuteri, a 2014 Chancellor’s Award for Student Excellence winner at Farmingdale State College, is the creator of Weather Reader.  It was his first shot at developing an app, and already he is building an international user base.

Five hundred and twenty two Weather Readers have been downloaded worldwide, 247 of which were outside the U.S.  It’s free, and already Scuteri is thinking about improving it.

“The feedback has been good,” Scuteri says.  “Users like my app because it’s fast.  The improvements to make are to add forecasting, the heat index and chill factor.”

Why a weather app?  There are already plenty out there.

“I asked a friend who has developed some apps for advice.  He said a weather app is a good start.  It gives the opportunity to learn GPS and user interface.  I decided I would make mine simple so that it would need minimal data from weather servers,” Scuteri says.

“I don’t make any money on it.  I made the app as the start of an app portfolio to help me get my name out in the development world.  I want to make informative apps and possibly some games.”

Turns out Scuteri isn’t alone among the college’s app developers.  Jeffery Betts, Class of 2013, was part of a team last fall that created Makr, a free iPad app that can turn even the most diehard technophobe into a graphic designer.  An Apple Editor’s Choice pick, you can use it to design cards, invitations, labels, stickers, logos and more.

It’s gotten lots of buzz too, with mentions in media such as Martha Stewart Living and Brit + Co., and more than 250,000 installations.

“We’ve seen a great response to Makr,” Betts beams.  “We’ve been so inspired by our growing user community – users who are creating everything from custom logos and business branding to wedding materials and more.

“Makr is about democratizing design, enabling anyone to be their own designer.  We created it to bring powerful design tools into the hands of the public in a tool that’s fun and easy to use.” 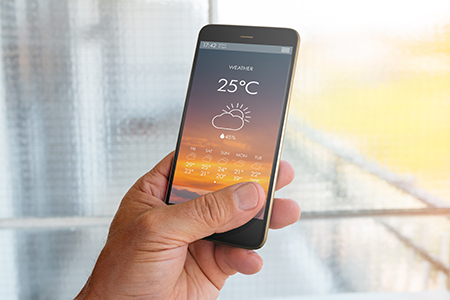