Farmingdale State College's Professional Pilot Program Now One Of Only 45 in the U.S. to Allow Reduced Flying Time for Certification

Students in the Aeronautical Science – Professional Pilot degree program at Farmingdale State College will now have to fly only 1,000 hours after completing their Bachelor of Science degree to earn airline transport pilot certification, according to a recent agreement between the college’s Department of Aviation and the Federal Aviation Administration.  The previous requirement was 1,500 flying hours.

“This is an honor for our Aviation Department, and a tribute to the faculty and students in our Professional Pilot program,” said Farmingdale State College President W. Hubert Keen.

The program enhancement comes at a fortuitous time for the airline industry.  According to a 2013 report by commercial jetliner manufacturer Boeing, the airline industry is expected to receive delivery of tens of thousands of new jetliners over the next 20 years, and nearly a half-million new pilots will be needed to fly them.  Nearly 86,000 of those will be needed to fly North American airspace.  The largest growth area is the Asia Pacific region, which will need more than 192,000 new pilots over the next two decades.

“Our Pro Pilot students are well trained and prepared to meet the future needs of the airline industry and now our graduates can be hired by their future employers more than 33% faster than before,” said Dr. Michael Canders, associate professor in the Aviation department.

According to the website AvScholars, there are more than 300 colleges and universities offering a professional pilot or equivalent degree.  Farmingdale is now one of only 45 colleges or universities which are currently authorized by the FAA to certify their graduates for the reduced flight hours necessary to obtain a Restricted Airline Transport Pilot (R-ATP) rating.  Other schools are expected to receive certification but Farmingdale now ranks in the top 15% of all schools offering aviation degrees which are permitted to certify their graduates.

“We believe that this Letter of Authorization to certify our graduates that we received from the FAA is strong external validation of the quality of our Aviation programs,” Dr. Canders said. 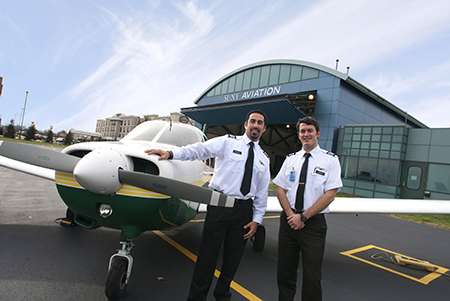