Michael Mastermaker graduated in 1998 with an AAS In Advertising Art and Design. He has returned to Farmingdale, this time as a Visiting Assistant Professor, but still recalls his first impressions as a student being introduced to a much larger world of art and design. He learned about professionalism and how to serve the needs of the client.

After Farmingdale, Michael pursued illustration and traditional design. He found a home in the world of educational supplies and publishing, illustrating and designing textbooks. From there it was a natural transition to screen-based media, as video and software were becoming more predominant in supplemental educational materials. He says, “Comics were always part of my life professionally, but largely for independent publishers. I got heavily involved in web design due to web comics.”

Michael has always had a passion for comics and is involved with contributing artwork to card sets for Star Wars, Marvel, X-Men, and Stranger Things. It’s been a long road of submissions, drafting, and practicing his craft. He sent sketches and samples to Marvel every month for five months, each with different improved images. Topps hired Michael for a Star Wars project, which led to the Walking Dead, and now Stranger Things. Michael prides himself on his efficiency to deliver his work at least two weeks prior to his deadlines.

As far as advice for students goes, Michael preaches that a great work ethic, passion, and persistence is key. He says, “100 nos are usually negated by one yes.” Michael emphasizes art is a business which involves bookkeeping, invoices, contracts and accounting. Talent only goes so far without reliability. If you’re a die-hard comic book fan of the Star Wars films and comic books, you’ve probably seen Michael Mastermaker’s work. 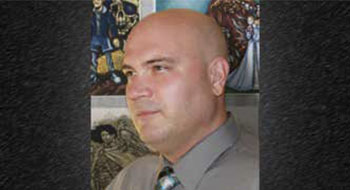