At the heart of the Farmingdale State College campus reside the Ornamental Horticulture Teaching Gardens, a symbol of the college’s proud agrarian origin.

The gardens, part of the campus since its founding in 1912, have served as the location for festive parties and solemn memorials, but primarily they have served as a living laboratory for students in horticulture.

One of those students – who became an outstanding success and nationally recognized leader in horticulture – has been honored by his alma mater for his loyalty, generosity and service to the college.

Visitors to Farmingdale’s gardens will now be informed through a plaque affixed to the brick post at the main garden entrance that they are entering the Robert F. Ench Teaching Gardens.

“Robert Ench is a part of the fabric of this college,” said Farmingdale President W. Hubert Keen. “The gardens and our horticulture students have benefited mightily from his generosity.”  He continued, “Bob is a prime example of how hard work, education and ingenuity enable a person to become a successful entrepreneur.”

Shortly after graduating from Farmingdale in 1960, Ench grew a local garden center, Flower Time, to a chain of 38 retail centers.  From there, he became chairman of an operation that merged Flower Time with Frank’s Nursery and Crafts Shops with 250 stories across the nation.

Today, Robert Ench is President and Chairman of the Board of Hopewell Nursery in Bridgeton, New Jersey, an operation encompassing over 2,000 acres.

Ahead of his time in his advocacy for sustainable use and conservation of native wildflowers, he was selected to work with Lady Bird Johnson, former First Lady, on beautification projects.

At the college, he served as president of the Alumni Association, and was a member of the College Council, the Farmingdale College Foundation and the Horticulture Committee.

In 2010, Ench received an Honorary Doctor of Humane Letters from the State University of New York. In 1983, he received the highest honor Farmingdale State can bestow, the Ram’s Horn Award.

Emeritus President Frank A. Cipriani said that “at a time when the horticulture program was threatened, Bob came in like a knight on a white horse to make sure the program not only continued but prospered.”

Fellow alumnus Vinnie Naab of Home Depot said, “Bob Ench is a legend – an icon – someone people in horticulture will talk about for the next one hundred years. He stands for quality and recognizes the value of education.  He has gone out of his way to hire Farmingdale graduates.”

“You know, life goes by very quickly,” said Ench, and “everything I have managed to accomplish is because of the people I have been privileged to work with. I have only good memories of my time at Farmingdale.  And to be surrounded by my family and by friends I’ve known for over fifty years at the Garden Dedication is a great honor.” 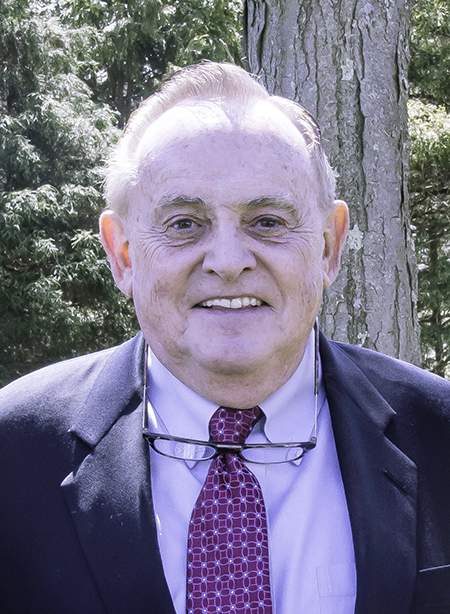